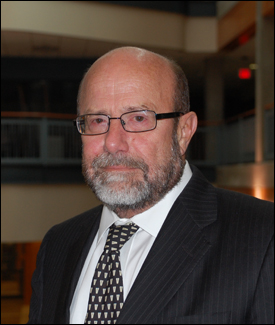 Knowles Arthur "Art" Overholser serves as senior associate dean of the School of Engineering. He is a 1965 chemical engineering graduate and earned his doctorate in chemical engineering at the University of Wisconsin and a post-doctoral appointment at Imperial College in London.

Overholser joined Vanderbilt in 1971 as an assistant professor. During his career, he served as a visiting scientist at the University of California at San Francisco. He then joined Vanderbilt's Department of Biomedical Engineering, where he pursued research in quantitative cardiovascular physiology. He has been with the Engineering Dean's Office since 1999, where he has administrative responsibility for the undergraduate educational functions of the school.

Overholser is a celebrated member of the engineering community, having received numerous awards and recognitions at the university and national levels. At Vanderbilt, he received the Ellen Gregg Ingalls Award for Classroom Teaching and the Thomas Jefferson Award for Distinguished Service. At the national and state levels, he is a leader in a number of professional organizations and is dedicated to engineering education.