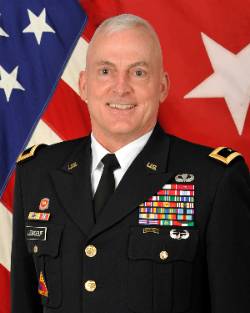 Maj. Gen. Eugene J. LeBoeuf is professor of civil and environmental engineering at Vanderbilt University. He joined the faculty in 1997, and has served as associate department chair and director of undergraduate studies.

His research involves the analysis of surface water and groundwater resources, to include the fate and transport of emerging contaminants in the environment, and multi-objective optimization of hydropower generation. He has been awarded four U.S. patents.

Prof. LeBoeuf is a recipient of a National Science Foundation Faculty Early Career Development award and he has been a faculty research fellow with the Environmental Science Division at Oak Ridge National Laboratory. He is a Fellow of the American Society of Civil Engineers and he serves as the chair of the awards committee for the Environmental Council of the ASCE Environmental and Water Resources Institute. Prof. LeBoeuf is a Distinguished Alumnus of Rose-Hulman Institute of Technology and serves on the Board of Advisors for their Department of Civil Engineering.

Outside academia, Prof. LeBoeuf is a major general in the U.S. Army Reserve, where he has received numerous awards including the Distinguished Service Medal, Legion of Merit, Bronze Star, and General Douglas MacArthur Leadership Award. Prof. LeBoeuf currently serves as the Commanding General for the 79th Theater Sustainment Command headquartered in Los Alamitos, Calif., and as the modernization subcommittee chair for the Army Reserve Forces Policy Committee.

Prof. LeBoeuf and his wife, Teresa, have two children, Lauren and Nathan, and reside in Franklin, Tenn.