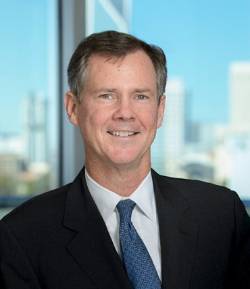 Jim Johnson is founding partner of Summit Park and has over 25 years of principal investing and investment banking experience.

Prior to founding Summit Park in 2006, Mr. Johnson was a partner at Windward Capital Partners, a New York-based middle market private equity firm where he was employed since the firm’s inception in 1995. Prior to joining Windward, Mr. Johnson was in the media investment banking group at CS First Boston. Previously, Mr. Johnson worked at BellSouth Corporation, first as a systems analyst and later in national account sales.

Mr. Johnson received his bachelor of science degree in biomedical engineering and mathematics from Vanderbilt University and received his MBA with honors from the Columbia Business School.

A native of Nashville, Tenn., he now resides in New York City with his wife Leslie. The Johnsons have two children, Josephine and Colin, BS’19, who earned his degree in human and organizational development from Peabody College.