DESIGNING VEHICLES IN THE CLOUD THROUGH AN INNOVATIVE COLLABORATION PORTAL

The VehicleFORGE portion of the DARPA-funded Adaptive Vehicle Make (AVM) project creates an innovative cloud-based platform that integrates a wide range of model repository, design collaboration, and user management capabilities into a collaboration portal and testing ground for the competition portion of AVM.

VehiclefoRGe includes many traditional collaboration tools, such as Web-based infrastructure for discussions, design submissions, and brainstorming solutions to design problems, with an important addition: The system has the ability to integrate computer-aided design (CAD) models and other structural and behavioral representations of design found in cyber-physical systems modeling. It also has the capability to quickly discern differences between models as the design process progresses.

The success of VehicleFORGE will help demonstrate the viability of cloud-based deployment of complex analysis tools and create the foundation for new types of collaboration within the cyber-physical system community. "Generally, these kinds of virtual communities only exist for the lifetime of a grant or program. Once the funding stops, everything disappears except a final report that documents what transpired on the project. Innovations like VehicleFORGE will enable new kinds of longer-lived collaborations between researchers and practitioners. We also expect it will become a platform for incubating future scientific and engineering innovations," Howard said.

For the AVM project, VehicleFORGE will support DARPA's goal of leveraging open innovation. This innovation will occur via collaborative model development by teams from diverse organizations that compete to build the best design. By democratizing the innovation process, DARPA plans to engage several orders of magnitude more talent than current industry models.

"In today's world, you have just a few highly specialized contractors who compete for this kind of work," Howard said. "So, the government often doesn't see much variety of responses in solicitations and, therefore, they don't get much design diversity or innovation. The way to accomplish that goal is to decompose the method by which systems are acquired and increase competition by an order of magnitude using cloud-based collaboration tools like VehicleFORGE."

Using collaboration methods based on the successes of open-source software communities, Howard's team selected the code base of SourceForge.net as a starting point for VehicleFORGE. "To build VehicleFORGE, we had to reinterpret software forges for a very different domain: cyber-physical systems. Designs here are dominated by material and physical concerns, which are strongly reflected in the ways designers represent and analyze these systems," he said.

The work was completed rapidly in a year's time to have VehicleFORGE in place for the first AVM design challenge: designing a drive train for the FANG amphibious vehicle. 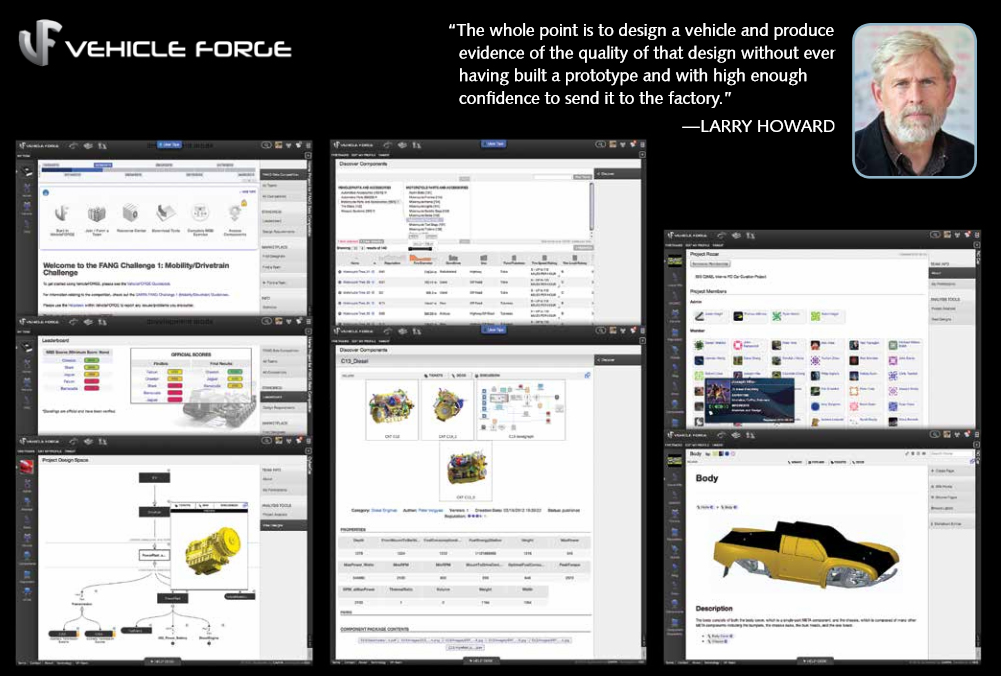 "The whole point is to design a vehicle and produce evidence of the quality of that design without ever having built a prototype and with sufficient confidence to send it to the foundry," Howard said. Successful designs will take into account the entire supply chain equation to reduce cost. "If I have to special order a part from one place on the planet, and it just had an earthquake, then I can't put this vehicle in the field," he explained. The manufacturability of the design is another key component in the AVM competition.

VehicleFORGE is part of the next generation of engineering design, representing a shift to a modeling and simulation approach, which will become a dominant paradigm in engineering, not just a fleeting technological fad, Howard predicted. He added, "The challenge will be to interest and educate a new generation of engineers, entrepreneurs, and investors in these emerging technologies."

"We're right on the cusp of a really big change if projects like AVM and VehicleFORGE pan out," Howard explained. "There will be many things that happen afterward. It's all contingent on the value of the demonstration. The AVM concept is vital to the DoD's ability to sustain and improve capabilities in the future. There are so many brilliant engineering minds out there. Unless the military finds ways to engage them in building the things they need, those engineers will continue to make great things, but for some other purpose besides national security."