Distributed real-time and embedded (DRE) middleware is computer software that integrates diverse programming languages, operating systems, networks, and hardware and serves as an important building block for many projects at ISIS. The motivation for this middleware sprang from the realization that companies and laboratories were constantly rewriting software from scratch to handle complex distributed systems programming problems, such as interprocess communication, demultiplexing, concurrency, synchronization, fault tolerance, and security concerns. DRE middleware provides common software infrastructure that can be reused and adapted for diverse functions in a variety of operating systems.

Douglas C. Schmidt, professor of computer science and an ISIS senior research scientist, began developing open-source DRE middleware as a graduate student at the University of California at Irvine in the early 1990s, and it became the subject of his Ph.D. thesis. When Schmidt took his first faculty position at Washington University in St. Louis, Aniruddha Gokhale, now associate professor of electrical engineering and computer science and an ISIS senior research scientist at Vanderbilt, was one of his first graduate students. "Together we pioneered the open-source DRE middleware innovation cycle and discovered many foundational patterns underlying the design of flexible and optimized DRE middleware," said Schmidt.

Schmidt and Gokhale led the development of the influential middleware packages ace (ADAPTIVE Communications Environments) and TAO (The ACE ORB), which are popular open-source, pattern-oriented frameworks. They have been used successfully by thousands of companies and projects worldwide in many mission-critical application domains, including national defense and security, datacom/telecom, financial services, air transportation management, and medical engineering. ACE and TAO formed the basis for CIAO (Component Integrated ACE ORB), which they developed after joining ISIS at Vanderbilt to extend ACE and TAO. CIAO provides powerful component-based abstractions using advanced deployment and validation techniques based on the ISIS GME (Generic Modeling Environment) toolsuite (see page 32).

"We're the ones who made open-source DRE middleware widely accessible and adoptable by the mainstream for mission-critical application domains where the right answer delivered too late becomes the wrong answer," Schmidt said. For example, the response time of an antilocking braking system coming seconds later, instead of within a fraction of a second, can lead to catastrophic consequences, despite the response being functionally correct.

ACE, TAO, and CIAO are important components of key ISIS projects, including System F6, which is building a network of orbiting satellites in the sky called "fractionated spacecraft" (see page 8) and Android Mobile Military Middleware Objects (AMMO), which is a lightweight middleware platform that converts standard smartphones and mobile apps into secure military and disaster recovery communications devices (see page 20).

At its basic level, DRE middleware shields operating system differences so that specific applications can operate in any kind of system. It keeps proprietary commands or functions from interfering with application portability, while still ensuring end-to-end, quality-of-service properties, such as low latency, dependable timing, data confidentiality, and high throughput.

The importance of open-source DRE middleware like TAO increased after the dot-com bubble burst, Schmidt explained, because many companies had difficulty finding ways to thrive due to their large investments in proprietary middleware. "They had a large and growing customer base, but a decreasing revenue stream due to lack of investors and shrinking stock prices. They began to adopt the open-source DRE middleware technology we'd developed and deployed it into their code bases," he said.

The middleware community at Vanderbilt has brought in over $20 million in research funding in the past decade, yielded a half-dozen books and hundreds of technical publications, and helped graduate more than 25 doctoral and master's students, Gokhale added.

"DRE middleware is a perfect example of the way researchers at ISIS combine fundamental research with applied research to solve real problems," said Schmidt.  "It comes from a combination of a deep understanding of the research principles plus awareness of the challenges faced by practitioners. We have many research collaborations and partner with other top universities, too. In addition to our cutting-edge research, one of the roles we increasingly play is the role of research integrator." 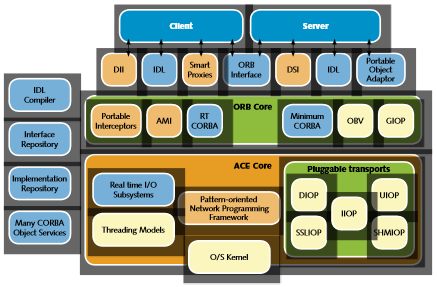 The beauty of centering the open-source DRE middleware work at an academic institution is the ability to bring together people from around the world working in various capacities and time zones and for diverse purposes—from industry to government to institutes—to solve common problems. "Our goal is to always find something new and take it in new directions. We've been fortunate to work with many really bright researchers and developers along the way," Schmidt said.

AMMO (see page 20) uses ACE as a portability layer, making it easier to write software that runs seamlessly across different operating systems, such as Windows and Linux. ISIS's DRE middleware also has been used in building collaborative educational tools "to support the idea that a group of school kids can come together and then collaboratively work—even when they are geographically and spatially distributed—on real problems that will help them further strengthen their STEM concepts," Gokhale said.

"Even though our DRE middleware work has been going on for over twenty years, newer and better results are emerging because the needs of our sponsors keep changing," Gokhale said. For example, ISIS is teaming with industry on a Small Business Technology Transfer (STTR) project funded by the Air Force Research Lab that uses ACE, TAO, and GME to provide a real-time computing cloud over multicore and distributed-core hardware platforms.

Schmidt and Gokhale both said the collegiality and dedication to world-class, interdisciplinary research with global impact at ISIS make their work especially gratifying. "What you find at ISIS are people who look at problems from many different perspectives," Gokhale said. "We're all about outreach and collaboration. That's why we've been so successful at middleware, since it's fundamentally an integrative technology that makes it easier to build DRE systems out of collaborative components. This focus has driven us to seek partners and do things that have a broad impact, rather than just limited point solutions."