Designing a complex vehicle in one-fifth the time is the revolutionary concept behind the Adaptive Vehicle Make (AVM) research program, a flagship initiative funded by DARPA with heavy involvement by ISIS. This ambitious program seeks to drive innovation in design automation and manufacturing and intends to completely revamp the way the DoD supplies vehicles to the nation's troops.

In the conventional model, a contractor creates a military vehicle from the ground up, from design to manufacturing. DARPA's open AVM approach will allow multiple vendors to compete at multiple levels throughout the acquisition process, saving time and money, as well as creating economic opportunities for more participants.

"This is the kind of innovation that allows separation of design from fabrication, a model that revolutionized the VLSI industry. Right now, the design can only be done by a shop that has the integrated capability to do a complete production run. The idea is to detangle the design houses from manufacturing houses and make the entire process more open, innovative, and competitive," said Sandeep Neema, ISIS senior research scientist and research associate professor of electrical engineering and computer science.

In the AVM project, ISIS is creating tools through model-integrated computing and cyber-physical systems engineering processes and methods. These processes, methods, and tools will allow rapid  reconfiguration and analysis of the whole vehicle design. Vehicle components can be combined, added, or modified quickly, creating powerful capabilities for designers.

"We should be able to apply these concepts and tools to a variety of vehicles, though the current focus is on amphibious vehicles," said Neema, who along with Ted Bapty, ISIS senior research scientist and research associate professor of electrical engineering and computer science, led the initial AVM design phase, called "META." They are now leading teams of ISIS research scientists and engineers, creating an open-source, fully integrated toolsuite for the broader AVM project.

Through AVM, DARPA is harnessing creativity and activity of unconventional design and manufacturing entities including small companies and self-organized teams of collaborating experts to yield a more open vehicle design process. Acompetition portion of the AVM program feeds into the ultimate goal: the democratization of vehicle design. THis process is open to anyone, even student groups at the K–12 level. The VehicleFORGE collaboration portal (see page 24) will allow diverse teams to work together without geographic limitations.

The major components of AVM that ISIS is leading or participating in are: 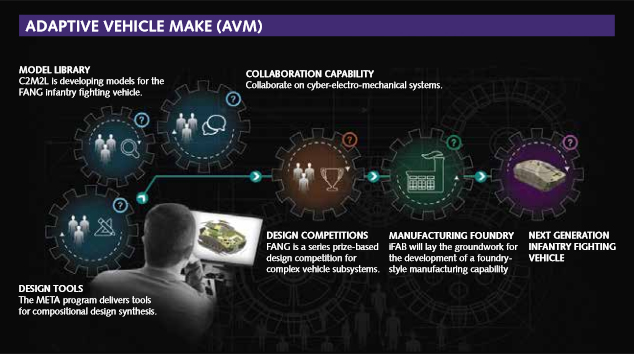 Computer software, hardware, and scads of physical components must integrate seamlessly to meet DARPA's goals for AVM. "We cut across the spectrum of engineering skills to achieve these goals," said Bapty. "The main idea is to drive innovation in design and manufacturing."

"The potential impact of our research on manufacturing is huge," Neema added. "Being able to create a design rapidly and have it built quickly has immense potential. That's the model of manufacturing that the U.S. needs to evolve toward." The success of AVM could yield better products that can adapt to markets faster, with more products rolling out more efficiently and frequently, he said.

META and the other AVM projects represent the culmination of many previous ISIS projects, from designing tools for space station systems to automobile manufacturing information systems. "Having done that process over and over again, we are well suited to meet the AVM challenge. We have the core set of concepts already in place," said Bapty. "Our technology and people base is broad and deep."