Modern military systems, particularly avionics, are increasingly dominated by software, which is driving the urgent need for technologies being developed at ISIS that permit the Department of Defense (DoD) to build and update mission-critical software systems for aircraft better, faster, and cheaper.

A consortium of industry, academic, and government entities known as the Future Airborne Capabilities Environment or FACE™ is helping to achieve that DoD goal by defining a common operating platform environment. That operating platform is comprised of a set of new standards, recommendations, reference implementations, and conformance tools to help reduce the cost of software acquisition for military avionics systems.

Currently, DoD-selected contractors often build everything from the ground up, including the bulk of the soft-ware. When it's time for a system upgrade or update, the program office is forced to go back to the original contractor because those systems are often unique or protected by proprietary interfaces. As a result, the military has created many redundant "point-solutions" that are prohibitively expensive to develop, certify, and sustain, explained Ted Bapty, research associate professor of electrical engineering and computer science and senior research scientist at ISIS.

But what if these systems were based on constantly improved and updated software that used open, standard interfaces? Common functions that apply to multiple systems would then become accessible to all defense contractors. Large and small businesses could participate in these projects, greatly expanding the talent pool available to the program offices. That's part of what FACE seeks to do, added Bapty.

"FACE is an effort to open up the process and ensure contractors use a common set of interfaces, procedures, and requirements," he said. "The government can then incorporate pieces from other contractors to leverage their efforts and have more portability and interoperability of acquired software components across multiple platforms."

"The military has traditionally developed software from scratch. But with the component-based design paradigm provided by FACE, if multiple defense avionics programs have the same needs or goals, they can use the same soft-ware from related projects," Davis said. So that means that software created for an Apache helicopter, for example, could conceivably be used in another type of aircraft.

Earlier attempts at systematic software reuse for the DoD often ended with failure, said Douglas C. Schmidt, professor of computer science and a senior research scientist at ISIS. One reason for these failures was that system integration has traditionally been viewed as an interoperability problem that can be solved with standards and discipline alone.

ISIS is developing a reference implementation and associated model-integrated computing software toolkit as part of FACE. This software will be available in opensource form to anyone building avionics systems for the DoD. The resulting FACE ecosystem will help reduce the barriers to adoption of the standard. Rapid adoption of FACE will lower total ownership costs, achieve better performance, field innovations more rapidly, and leverage existing government and defense contractor workforce more effectively than traditional closed-source approaches to fielding software.

Successful integration of the FACE open-source software will require a modular and well-articulated software system architecture, with precisely specified interfaces and safety and security profiles. "What you're allowed to use and not allowed to use (when building software) is clearly defined," Bapty said. "In addition, FACE will enable full disclosure of design specifications to contractors, including competitors and small businesses."

The ISIS team of ten professionals is partnering with a team from Georgia Institute of Technology under a contract with the U.S. Navy to provide technical assistance, software development, and inputs to the standards. The Open Group-managed consortium of government, industry, and academic participants is helping define and ratify the standards. An initial draft standard already is in place, but it will take some time to reach full penetration into the military avionics marketplace.

The ISIS team is building a set of conformance tools to ensure that software developed by contractors will meet the FACE standards. They are also working to develop a conformance verification process.

"A standard has no teeth unless you can enforce it and is not viable these days unless you can enforce it cost effectively," Bapty explained. Advancing and fine-tuning the conformance tools is another area for potential research growth, he said, adding that the FACE initiative should create multiple opportunities for contractors who excel in different aspects of software creation and who realize that g 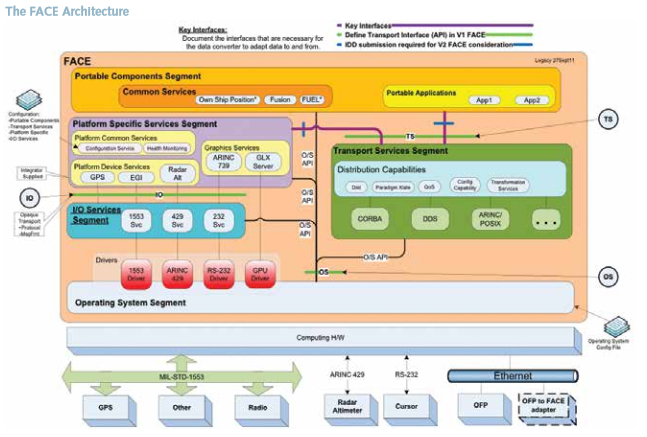 overnment purchasing policies must adapt to the changing economic environment.

"The FACE project has a huge potential to jump-start many different research and development areas," said Bapty. Moreover, by fostering competition and innovation through open business practices, FACE enables the development and sustainment of software and hardware components by different contractors over the life cycle.

"The cost efficiencies driven by FACE and related common operating platform environments that ISIS is involved with are invaluable in helping the United States ensure our national security at a price we can afford," said Schmidt.