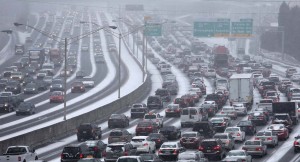 Traffic inches along the connector of Interstate’s 75 and 85 as snow blankets Metro Atlanta on Jan. 28, 2014. (Photo courtesy Atlanta Journal Constitution)

Traffic inches along the connector of Interstate’s 75 and 85 as snow blankets Metro Atlanta on Tuesday afternoon, Jan. 28, 2014 as seen from the Pryor Street overpass. Georgia Gov. Nathan Deal is preparing to declare a state of emergency as a winter storm coats the region with snow and ice. State transportation officials said a mass of commuters leaving downtown Atlanta at once created traffic jams on interstates and surface streets. (AP Photo/The Atlanta Journal-Constitution, Ben Gray)

This entry was posted on Wednesday, December 31st, 2014 at 2:32 pm and is filed under . You can follow any responses to this entry through the RSS 2.0 feed. You can skip to the end and leave a response. Pinging is currently not allowed.