Perhaps no academic discipline enjoys, evolves and embraces new ideas more than engineering. And often no place is that more apparent than in the classroom. Vanderbilt University School of Engineering professors and students are early adopters, investigating how new technologies can aid learning for themselves, their peers and the next generation of students.

One professor quickly learned what it was like to teach and respond to 30,000 students. Another imagined "what if" regarding digital learning and now leads Vanderbilt's digital initiative. 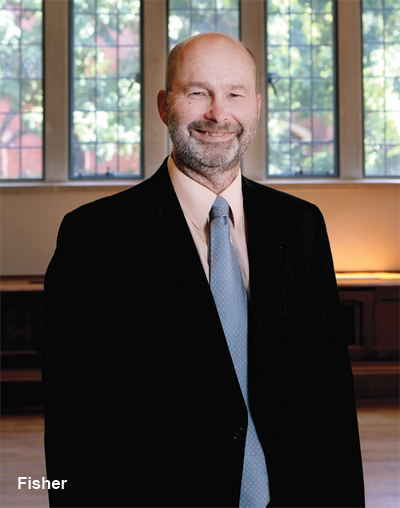 As one of the leading research institutions in the country and home to the nation's top education school Vanderbilt is uniquely positioned to lead and explore digital learning. The university recently established a new Institute for Digital Learning, led by Associate Professor of Computer Science and Computer Engineering Douglas Fisher . He's charged with exploring how to leverage and shape digital learning technology in ways that increase Vanderbilt students' engagement in discovery and to bring the knowledge generated by faculty to traditional and nontraditional students around the globe.

The institute and other Vanderbilt digital learning projects stemmed from a university-wide committee on social media and the Internet convened by Chancellor Nicholas S. Zeppos in 2012. Such forward thinking positioned the university to be on the cutting edge of developments in the digital arena. One such development was a partnership with Coursera, an online platform for open-access, noncredit classes, available at no cost to participants.

Douglas Schmidt was one of the faculty members tapped to teach one of Vanderbilt's first MOOCs (massively open online courses) through Coursera. Schmidt, professor of computer science and associate chair of the computer science and engineering program, taught an eight-week course, "Pattern-Oriented Software Architecture for Concurrent and Networked Software," to more than 30,000 students worldwide.

What he learned in preparing to teach the course and then teaching it has changed the way Schmidt will interact with Vanderbilt engineering students in the classroom. He says his material is better 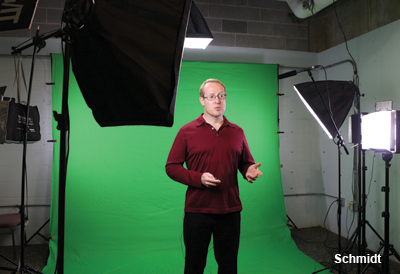 organized and he'll have his students watch the videos prepared for the MOOC outside of class, allowing him to restructure the course so classroom time will be spenton interaction and discussion. Schmidt sees it as personalizing education for students. He says that's really why computer science students come to Vanderbilt for mentorship, collaboration and the experience of a design studio in the classroom.

The lessons Schmidt and Vanderbilt learned through its first foray into MOOCs ties in with Fisher's work at the digital learning institute. In addition to developing the university's strategies regarding digital learning and managing relationships with Coursera, the institute will study the medium itself and promote innovations in on-campus teaching afforded by digital resources. It will also encourage and support faculty and student research on MOOCs, and oversee the production of content for Coursera and other platforms.

Fisher, an expert on artificial intelligence, particularly machine learning, computational models of creativity and applications in environmental sustainability, also served as a program director at the National Science Foundation from 2007 to 2010. He sees Vanderbilt's new institute as a commitment by the university to understand changing technology and to design for change, as well as to open new areas of research in education, big data and other areas yet to emerge.

From robots teaching children with autism to undergraduates teaching rocket science, Vanderbilt University School of Engineering projects weave learning and discovery for current students, future students and the generation beyond.

Young children love robots and it turns out, young children with autism can learn from them. An interdisciplinary team of mechanical engineers and autism experts at Vanderbilt are using a commercially available humanoid robot integrated with a system of cameras, sensors and computers to h 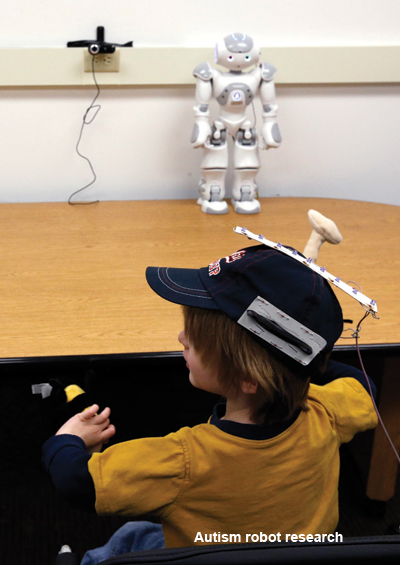 elp children with autism spectrum disorder learn to interact with people and objects around them. Mastering basic early social communications skills for children with autism can help them avoid future learning difficulties. Since one in 88 children are diagnosed with ASD each year, the need is great.

Nilanjan Sarkar , professor of mechanical engineering and computer engineering, developed the idea and reached across Vanderbilt's campus to Zachary Warren , director of the Treatment and Research Institute for Autism Spectrum Disorders at Vanderbilt's Kennedy Center. Their team tested the relative effectiveness of the robotbased system and that of human therapists. They found that children with autism often pay more attention to the robot instructor, and they respond just as well to requests and prompts from the robot. The robot system will not replace human therapists, they caution, but may help enhance early practices essential to learning.

The researchers hope that robotic systems act as an "accelerant technology" that actually increases the rate at which children with ASD learn early social and communications skills that they need. Encouraged by the success of the study, Sarkar and Warren have started developing robot-mediated autism intervention systems that will address other areas such as imitation learning, role playing and sharing.

The research was supported by a Vanderbilt University Innovation and Discovery in Engineering and Science grant, National Science Foundation awards 0967170 and 1264462, National Institutes of Health award 1R01MH091102-01A1 and by the Meredith Anne Thomas Foundation.

Watch a video of the robot in action at vu.edu/nao.

No Worries Dad, I Can Fix the Traffic Flow

No one knows better than engineers that America needs more science, technology, engineering and math (STEM) education. So Professor of Computer Science and Computer Engineering Gautam Biswas set out to show elementary and high school students that STEM subjects are cool. 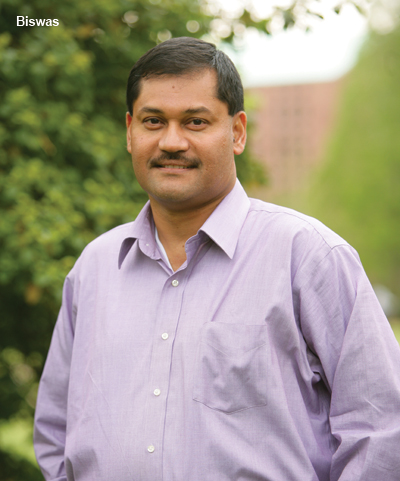 The projects encourage students to explore, build, analyze and reflect as they learn by modeling sciencephenomena. They then use modeling tools to answer questions about the world around them, such as how to
design a better fish tank or analyze traffic flow.

Science teacher James Parsons used the CTSiM system to teach kinematics and ecology to sixth graders in Nashville's Meigs Magnet School. The students enthusiastically applied their understanding of Newton's laws to design a roller coaster track and their knowledge of ecology to build a fish tank system. Their pre- to posttest scores showed significant gains in learning the subjects as well as in computer programming concepts.

It was six years and thousands of hours outside of class in the making, but the Vanderbilt Aerospace Club captured first prize in the 2013 NASA Student Launch Initiative after  third place finishes in 2012 and 2011. The 10-person student team also took home the 2013 Best Payload Design award for the most creative and 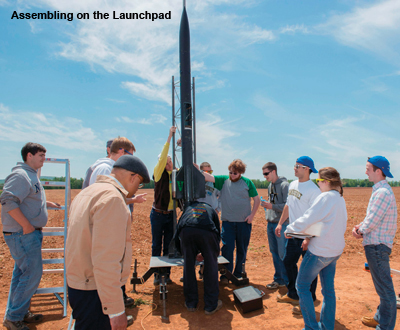 innovative payload experiment. It's the club's first top prize and the fourth consecutive year the club won the payload award.

Faculty adviser Amrutur Anilkumar , professor of the practice of mechanical engineering, said that right from its formation, the club identified novel payload design as the core scientific challenge that would justify rocket flight. It's a niche that has paid off for the school.

In addition to the actual planning, designing and constructing the rocket and payload, this year's team wrote four 150-plus page reports and conducted three successful rocket flights. They also taught rocketry lessons to more than 1,400 middle school and high school students as community outreach for their project.

The Aerospace Club is supported by NASA, the Tennessee Space Grant Consortium and Vanderbilt's Department of Mechanical Engineering.