In the seven years the Aerospace Club has competed, it has won the award for best payload design four times. It also has earned top spots twice each for website design, educational outreach and closest to altitude performance. In 2011 and 2012, the club came in third overall before winning first place in 2013. In 2014, the club dominated the field, winning four of the six major category awards project review, website design, educational engagement and closest to altitude in addition to the top prize.

Launching a rocket and safely landing it back on Earth is no easy task. The competition is an eight month project regularly reviewed by NASA engineers, contractors and industry experts. Teams must design unique payloads, prepare exhaustive engineering reports and flight test their evolving rocket designs and payloads all while communicating their efforts through a website and community outreach.

It is such a difficult competition that of the 31 competitors who entered, only 16 made it to the final step: launch day at the Bonneville Salt Flats in Utah.

In the 2013-14 academic year, all schools had a new, different challenge. NASA switched the competition’s focus to more intense research and required three different payloads, as well as an added focus on landing hazard detection systems. 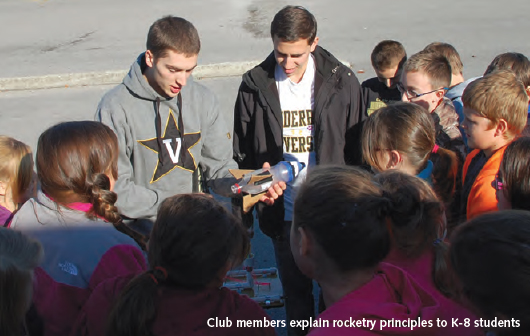 Even with the increased intensity, Vanderbilt’s Aerospace Club, advised by Professor of the Practice of Mechanical Engineering Amrutur Anilkumar, geared up to the challenge. Its STARC raft rocket undertook three experiments: a fuel delivery system that aimed to keep the fuel from sloshing in the fuel tanks under heavy deceleration, a biofuel-powered ramjet engine, and a camera-based “camjet” to detect hazards during landing.

Another challenge: The club’s members were also determined to extend their education outreach activities.

For the past several years, the team has worked with Heather Johnson, assistant professor of the practice of science education at Vanderbilt’s Peabody College, in developing a program to teach Nashville-area middle school students about the design, development and launch of bottle rockets. This year, they expanded their efforts by trekking several hours to rural Tennessee schools that might not otherwise have access to basic engineering curriculum.

The club members designed various experiments and Peabody educators developed a five-week curriculum in engineering design that resulted in a launch competition for the middle school students. The Vanderbilt students hope their efforts help build or increase interest for future engineers who might just be future winners of the NASA competition.

The team’s winning rocket has also been popular at national events, helping promote science, technology, engineering and mathematics (STEM) careers. The rocket was an attraction at the USA Science and Engineering Festival, which drew some 325,000 people to the Washington, D.C. event.

The club is sponsored by the Tennessee Space Grant Consortium, American Institute of Aeronautics and Astronautics (Tennessee section) and  anderbilt’s Department of Mechanical Engineering.

Advances developed by engineers influence our everyday lives in a variety of ways, generating solutions for societal issues and providing a framework for challenges to come. Vanderbilt University’s School of Engineering assures that the next generation of engineers and the ones after that have a solid foundation from which to start. 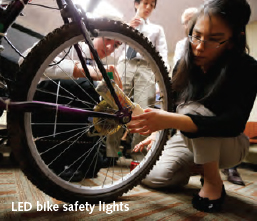 With a CubeSat, a lot is packed into a small package. At about 64 cubic inches, a CubeSat combines many elements of electrical engineering, including microprocessors, digital signal processing, radio frequency communications, power regulation and remote sensing. Add in that CubeSats are built using low-cost, off-the-shelf components, and you have a winning electrical engineering teaching tool.

CubeSat work will follow undergraduate students throughout the program. First-year engineering students will be introduced to the fundamental concepts behind satellite system design. Sophomores will be introduced to satellite circuit design techniques significantly beyond what is normally taught at that level. Junior and senior electrical engineering majors will continue to hone their skills using the CubeSats in
electronics lab experiments, a satellite design elective and senior design projects. As an added plus, the curriculum is designed to encourage experimentation and personal projects.

The concept for using CubeSats as a teaching framework was presented at the 2014 American Society for Engineering Education annual conference. 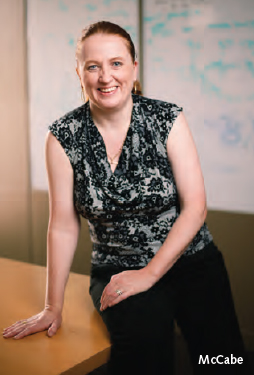 Young Researchers
Students who intend to become researchers may chomp at the bit to get into the lab and begin experimenting. Thanks to Vanderbilt’s participation in the National Science Foundation’s Research Experience for Undergraduates, they can.

Each year, about 10 undergraduates come to Vanderbilt to work closely with faculty researchers in a true interdisciplinary research experience. In addition to working one-on-one with a Vanderbilt professor, the students participate in weekly meetings covering topics ranging from ethics and the responsible conduct of research to demystifying graduate school and the GRE examination.

Under the direction of Clare McCabe, professor of chemical and biomolecular engineering, REU students work closely with the Vanderbilt Institute for Nanoscale Science and Engineering on nanomaterials innovation and fabrication research projects.

In addition to directing the REU program, McCabe also directs the university’s overall summer research program, Vanderbilt Undergraduate Summer Research Program, and directs graduate studies in the Department of Chemical and Biomolecular Engineering. As a member of the Multiscale Modeling and Simulation team, she focuses on molecular modeling to predict the properties of nanostructured soft materials.

The REU program is supported by the NSF’s Division of Materials Research and Engineering Directorate, as well as the Department of Defense ASSURE program. 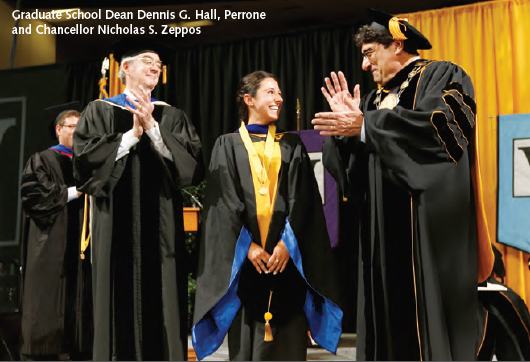 Worth More than a Mention
Today’s research often focuses on the discoveries of tomorrow. It’s equally important, however, to focus on the researchers of tomorrow. The School of Engineering does its part through educational opportunities for undergraduate and graduate students alike. A few highlights of the educational mission: