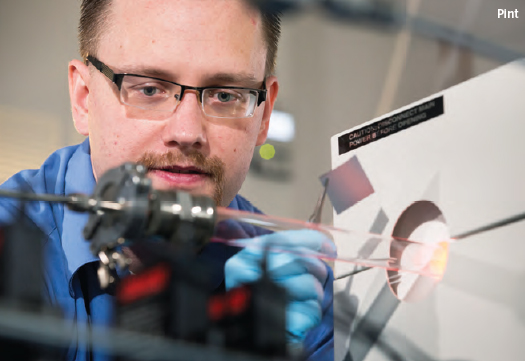 In recent years, technological mobility has greatly impacted the way we work, shop and communicate. But that increased freedom lasts only as long as our batteries do. One solution is using supercapacitors for energy storage and power delivery instead of batteries.

But what if that energy could be built right into system components, which could be recharged in a fraction of the time, replace the structural materials and last exponentially longer?

Thanks to the research of Assistant Professor of Mechanical Engineering Cary Pint and his team in the Nanomaterials and Energy Devices Laboratory, modern-day tethers such as batteries and power cords could be gone. They’ve recently designed a novel supercapacitor made out of porous silicon that can be built into a silicon chip and power onboard circuitry, or better yet, replace the structural casing of the system. Consider, for example, power built into the shell of a laptop, the chassis of an electric car or the drywall of a home to run lights and appliances. 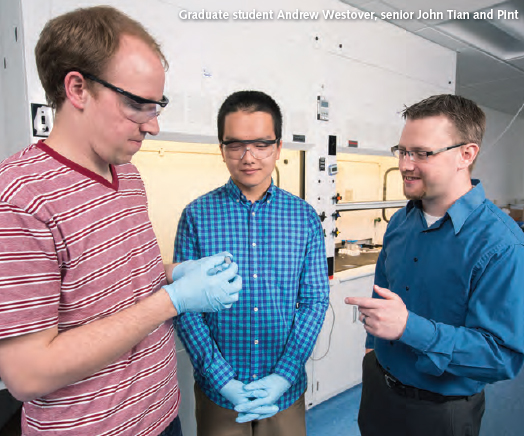 Much of Pint’s efforts have focused on using porous silicon, but his research broadly explores porous metals and carbons as well, which have equal promise across many different technologies. To activate these materials for energy storage, they are treated in such a way that nanoscale pores form. The materials are then combined with polymer films, which ooze into the pores when the electrodes are pressed together—similar to how cheese oozes into the crevices of bread in a panini. The polymer allows the charges to move back and forth and allows it to reversibly store and discharge energy.

The polymer also allows the structure to withstand pressure or mechanical forces. Pint’s group has demonstrated that these materials can maintain the charge storage behavior while subject to vibration forces more powerful than those observed in a jet engine.

Pint’s supercapacitor holds several benefits over traditional batteries. By storing energy in the porous material instead of using chemical reactions like batteries do, energy can be charged and discharged in minutes instead of hours. And it will operate for millions of cycles instead of a battery’s thousands. 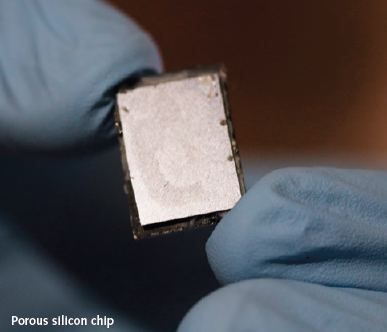 It also has the advantage of being small, unlike bulky existing supercapacitors.

Long term, the power cell technology means more energy can be stored in places where batteries don’t exist today—such as integrated into technology. Devices will continue to become smaller and lighter since they will no longer need room to house a battery. Fossil fuels will be reduced as a fuel source. And since energy storage will have a longer life cycle, waste from spent batteries could be reduced.

The research was supported by National Science Foundation grants CMMI 1334269 and EPS 104083. Materials fabrication was conducted in part at the Center for Nanophase Materials Sciences at Oak Ridge National Laboratory that is supported by the Office of Basic Energy Sciences of the U.S. Department of Energy.

From the birth of a new center to new materials and innovations for traditional ones, School  of Engineering faculty and students are tackling issues in energy and natural resources. Here  are just a few highlights. 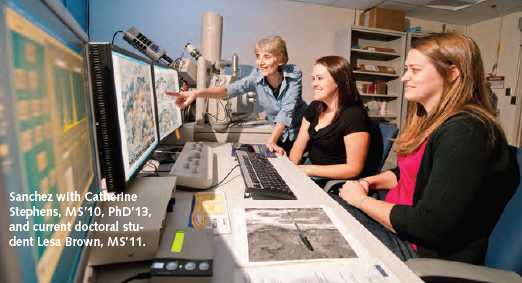 Preventing a Breakdown
With most waste, the faster the breakdown, the better. But when that waste is spent nuclear fuel, breakdown brings challenges—especially when it takes place in the fuel’s containment system.

Sanchez has long explored the link between nanotechnology and concrete performance in other applications; civil infrastructure, for one, is severely affected by concrete degradation. And yes, she sees the irony in her work. Civil engineering, with its focus on massive infrastructure projects like roads and bridges, is being influenced by developments at the nano level.

Understanding how radioactive and thermal environments affect nano-engineered materials, however, is key to ensuring that nuclear material can be safely held for centuries. Sanchez currently is studying which types of nanostructured particles perform best under conditions that most simulate
nuclear waste containment.

This research is supported by a grant from the U.S. Department of Energy’s Nuclear Energy University Programs. 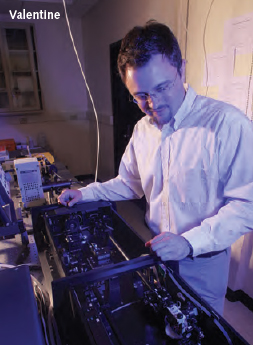 Now You See It…
Technically, it still isn’t possible to make an object completely invisible. But working in metamaterials artificially fabricated resources with optical properties not found in nature Jason Valentine is seeing new discoveries “appear.”

Valentine, assistant professor of mechanical engineering, is exploring the spectrum of visibility in metamaterials. He works primarily in silicon, which offers new possibilities thanks to its higher refractive index. His use of dielectric materials they typically absorb less light than metal counterparts can lead to breakthroughs in high-power lasers, offer infrared concealment and create single-mode lasers.

Valentine joined Vanderbilt in 2010. In early 2014, he was awarded the National Science Foundation Early Career Grant to further explore ultra-compact optical elements that can improve performance of visible and infrared cameras and be used to develop free-space telecommunications and optical manipulation. This work is supported by the Office of Naval Research. 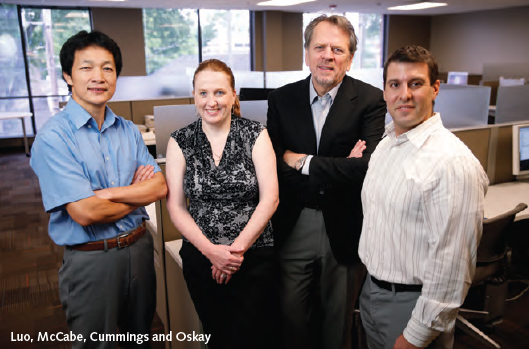 Alternative Energy,
Unconventional Storage
There is much promise in power from wind and solar. But what happens when the breeze doesn't blow and the sun doesn’t shine? Energy storage remains a significant issue, delaying full-scale development of these renewable resources.

Peter Cummings, associate dean of research and director of the new Multiscale Modeling and Simulation facility, is exploring the use of energy storage mechanisms such as batteries and supercapacitors for alternative energy sources. Each offers electrical storage solutions—and each has unique benefits. Cummings, the John R. Hall Professor of Chemical Engineering, is developing technologies that combine the best of both, but to do so requires understanding at the molecular level.

In working on capacitors that use room-temperature ionic liquid electrolytes, Cummings has relied on the MuMS group’s computer modeling strengths. The new interdisciplinary facility allows for the modeling of physical and chemical phenomena at all scales—vital since materials act differently at the nano level than they do at the micron level.

Vanderbilt is the first institution to develop an entity like MuMS that can do modeling from the very large to the very small. Much of the modeling is done via computer and requires advanced software technology that must be developed in-house, which allows MuMS to collaborate with Vanderbilt’s Institute for Software Integrated Systems—the world’s leading expert on computer modeling. Drawing from various departments in the School of Engineering, MuMS includes Cummings, Haoxiang Luo (mechanical engineering), Clare McCabe (chemical and biomolecular engineering) and Çağlar Oskay (civil and environmental engineering).

Cummings’ research is supported in part by a grant from the Fluid Interface Reactions, Structures, and Transport (FIRST) Center, funded by the U.S. Department of Energy.