It’s All in the Head 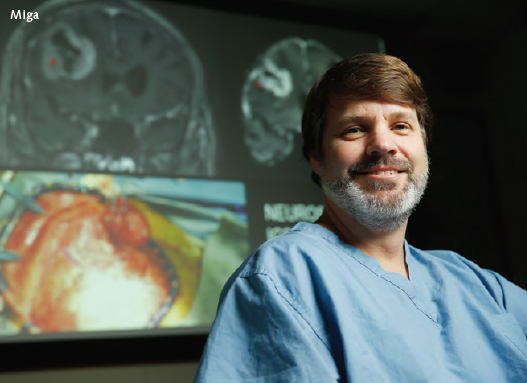 When a tumor starts in the brain, even benign growth can be life changing—especially if it compresses areas that control vital body functions.

Surgery is likely the best option but there are significant risks as surgeons must navigate a thin line between removing as much of the tumor as possible and preserving neurological function all within an ever-shifting setting.

As the skull is opened, the brain deforms or shifts, affecting the position of the subcortical structures and making targeting of a tumor more complex. Diagnostic images taken days or even hours before a scheduled surgery may not be accurate.

Being able to anticipate the changes that might occur before and during surgery, however, could help surgeons better navigate this complex environment. Michael Miga, professor of biomedical engineering, has been studying just that as part of a multiyear research project funded by the National Institutes of Health.

Miga’s research centers on providing a computer model of the patient’s brain before surgery to anticipate and account for potential deformations. This image driven patient-specific modeling framework can be conducted within one day of the anticipated operation, limiting the changes between the time the images are conducted and when the surgery is scheduled—and reducing any potential for significant changes in growth or positioning. 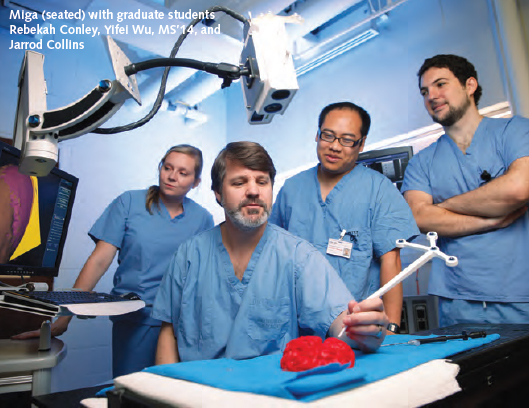 Then, during the operation, data measuring the brain’s surface is collected using a laser range scanner. Those measurements are then used with the computer model to update the pre-operative images to account for shifts that have occurred during the procedure. It updates these images rapidly, providing the surgeon with near real-time information. The technology represents a cost-effective and easily implemented hardware and software solution that is complementary to the surgeon’s routine workflow during the procedure.

As part of this multi-year grant, the research is moving into another phase, testing whether the technology could offer an alternative to intraoperative magnetic resonance imaging.

If the new technology proves as or more effective than iMR, doors may open for improvements in care. Because iMR is a powerful solution, it is resource-intensive. If Miga’s technology proves as accurate, it could represent a widely adoptable technology for any scale medical center with neurosurgical capabilities.

While this effort has been limited to neurosurgery, Miga sees potential applications in other soft-tissue environments, including abdominal and
breast surgeries.


On many university campuses, the disciplines of medicine and engineering are separated by  more than just physical distance. But at Vanderbilt, the School of Engineering is just a few steps from the Vanderbilt University Medical Center—and rich collaborations allow  engineering innovations to quickly be tested and put into practice nearby.

Better Bone Grafts
When breast cancer metastasizes, an already agonizing disease can be compounded. Bone pain, fractures and hypercalcemia excess calcium in the blood become as familiar as radiation, steroids and chemotherapy. Because cancer patients have compromised systems, traditional methods of healing can be challenging. To make matters worse, many bone therapies should not be used in patients with tumors.

Surgery often becomes the only option; bone grafts are used to stabilize implants and provide a scaffold on which new bone grows. Vital tissue can be taken from the patient to stimulate new growth, but that may mean another area of surgical pain at the donor site. The risk of complications increases at the site where the tissue was removed.

Scott Guelcher, associate professor of chemical and biomolecular engineering, is exploring alternatives in polymers that can serve as a scaffolding for new tissue growth. While his research is not yet in clinical trials, he currently is testing which compounds might aid in healing using minimally invasive surgery. These injectable polymers also can be augmented with antibiotics and growth factors to further increase effectiveness.

Composites also may be used to provide mechanical strength such as when a weight-bearing bone is injured and participate in the healing. The bone graft would then be resorbed, eliminating the need for more surgery to remove it. 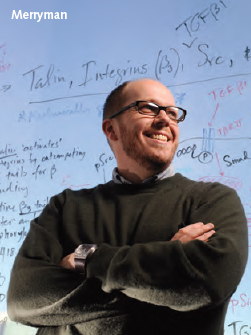 Hitting the Target
It’s one of the cruelest ironies of medicine: Those who need invasive surgery often are so sick that the surgery is as great a risk as the underlying disorder.

That is the case with existing treatments of degenerative aortic valve disease, which affects about one-fourth of those over age 65 and eventually leads to calcific aortic valve disease (CAVD). Currently the only treatment is open-chest valve replacement—an extremely risky procedure given the age of most patients.

W. David Merryman, who holds joint appointments as assistant professor of biomedical engineering, pharmacology, medicine and pediatrics, is exploring novel strategies to prevent and treat CAVD without the need for open-chest surgery. His most recent work is in developing serotonintargeted drug therapies that prevent valve cells from developing into myofibroblasts, which lead to CAVD.

Merryman’s approach is to create something positive out of something extremely devastating. In the 1990s, the weight-loss drug Phen-Fen caused rapid heart valve disease in previously healthy patients. His tactic is to redeem some of what was learned through Phen-Fen by targeting the same cell receptors with drugs that offer the reverse action. He believes this may prevent age-related heart valve disease altogether, which would in itself prevent the need for risky surgery for aging patients.

The research is sponsored by an NIH grant. 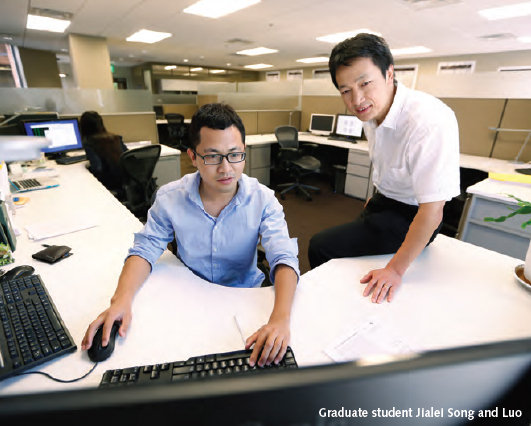 Finding a Voice
Complex math problems have no doubt left more than one person speechless. But what if those very math approaches could solve issues related to the voice? Haoxiang Luo, who holds dual appointments as associate professor of mechanical engineering and otolaryngology, is using complex mathematical computations to explore how air coming out of the lungs interacts with the vocal cords in producing sounds.

As Luo advances understanding of how the voice operates, new opportunities arise for treating benign lesions and scarring on the vocal fold. Luo’s three-dimensional modeling is expected to yield additional treatments, diagnoses and medical research. Much of the work is conducted through the school’s Multiscale Modeling and Simulation research group, of which Luo is a member.

He takes the collaborative research another step by helping train graduate and undergraduate students how to use multiphysics modeling to better understand the interaction of fluids, thermal, structures and electricity. Luo’s work in vocal dynamics builds upon his computational work modeling the flow-structure of insect flight. That work earned him the National Science Foundation’s Early Career Development Program award in 2010.

The research is conducted in collaboration with Purdue University and is funded by National Science Foundation grant 1066962. It is also supported by an NIH grant led by Bernard Rousseau, associate professor of otolaryngology and hearing and speech sciences in the Vanderbilt School of Medicine.