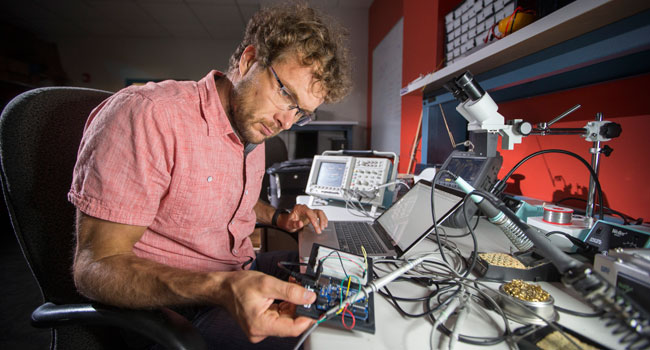 Engineering for a Revolution

Americans have become well-accustomed to the sight of Fitbit-adorned wrists, their wearers marching in place so that their smartphones can reward them with a celebratory message about hitting a step goal. That’s one small example of the Internet of Things.

And we’re starting to hear about intersections where the traffic light changes to accommodate an approaching ambulance. We have smart clothes dryers that turn on when electricity is inexpensive. That’s part of the Industrial Internet.

Both of these are precursors of the next technology revolution that Vanderbilt University’s Institute for Software Integrated Systems is helping launch. The intent is to extend the use and frontier of the Internet to create a deeply connected world where humans, their machines and the physical environment interact seamlessly, continuously and without mistakes and breakdowns that could lead to safety issues, security breaches, environmental harm, or other unintended consequences.

Imagine a convoy of six trucks communicating with each other to move safely as traffic lights accommodate their progress. Picture a smart home that locks itself up, but senses that there’s still a person inside and opens doors if a smoke alarm goes off.

That technology is called cyber-physical systems, and it has been institute director Janos Sztipanovits’ passion for a long time.

Cyber-physical systems technology focuses on designing systems so that people are living in a richly instrumented environment where virtually everything is connected to computers through networking—enabling a lot of automation, says Sztipanovits. The E. Bronson Ingram Professor of Engineering says the result is that many things will start interacting with each other that never interacted before. How can you keep track of all these interactions so you don’t damage the safety of your home?

“The world is getting more connected. We need to understand what are the new engineering principles where you can create safety, security and stability,” he says.

Through his participation, Vanderbilt was the first academic institution to join the pioneering Industrial Internet Consortium after it was announced in 2014. Technology giants AT&T, Cisco, GE, IBM and Intel founded the group, which now has more than 200 members supporting adoption of the Industrial Internet, integrating physical machinery with networked sensors and software. 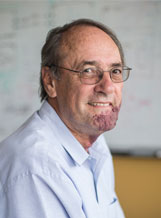 Sztipanovits and Vanderbilt’s Institute for Software Integrated Systems also manage the Cyberphysical Systems Virtual Organization for the National Science Foundation. They’re charged with linking together
all the organizations working on the topic, archiving and disseminating documents produced by research, and offering collaboration platforms for thousands of CPS researchers.

To show how much interest there is in CPS research and the foundational technology beneath it, Sztipanovits notes that in 2014, top information technology research company Gartner published a report outlining a long list of technologies belonging to the Internet of Things, the Industrial Internet and cyber-physical systems. The research group’s general expectation is that technologies such as smart robots and autonomous vehicles, big data, mobile health monitoring and cloud computing will make a huge impact in the next 5 to 10 years.

Rethinking engineering for a new era comes with its challenges, Sztipanovits points out. The sheer number of platforms that must be addressed to make this level of interaction possible is daunting, not to mention the large numbers of engineers contributing pieces to a vast system.

The Internet of Things, the Industrial Internet and cyber-physical systems are all different components in a major, ongoing technology shift.

Perhaps the best comparison, he says, is the old tale of the blind men describing an elephant—the legs, trunk and tusks. All are important, but in the end, the goal is seeing the entire beast. What an amazing elephant it will be.

Some of the institute’s cyber-physical systems research is supported by NSF award 0931632.

Top Photo: Peter Volgyesi works on a sensor testbed as part of a trans-institutional NSF project led by a College of Arts and Science professor, Akram Aldroubi. Right: Janos Sztipanovits directs the Institute for Software Integrated Systems, which has been charged by the NSF with linking together all organizations working on cyber-physical systems for the agency.