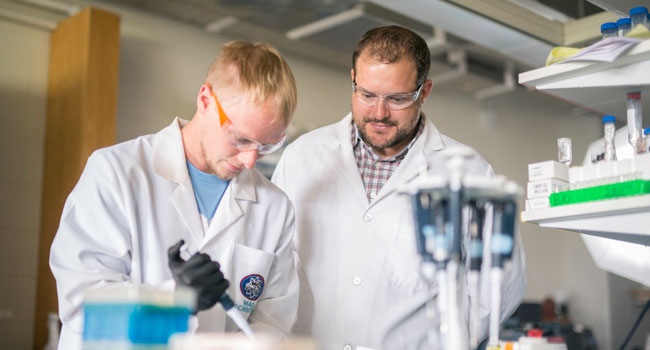 Since his postdoctoral fellow days, Craig Duvall has been looking for a way to improve intracellular peptide delivery to treat diseases such as cancer.

It wasn’t until he was a newly minted assistant professor of biomedical engineering at Vanderbilt University that Duvall seriously considered a different use for his work. He happened to catch a presentation by Colleen Brophy, M.D., professor of surgery, about the intracellular-acting peptides she was researching to improve success rates in vascular transplants for patients suffering from heart disease.

They combined forces, and five years later, they celebrated a major breathrough announced in a paper in the journal Science Translational Medicine and have a number of promising developments on the horizon. The breakthrough? The trans-institutional team’s nanoparticle delivery system may significantly improve the success rate of coronary artery bypass grafts. 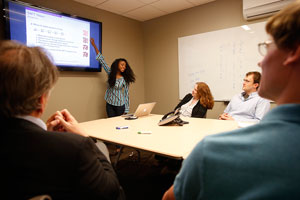 They have licensed their delivery technology to Moerae Matrix Inc., and one of Duvall’s former graduate students—Brian Evans, PhD’15, who served as lead author on the well-received journal article—is working with the company to seek Small Business Technology Transfer Research grants to fund further research and possible human trials.

“We really held onto this work for a long time instead of trickling out a number of incremental papers on it,” Duvall says. “That paper is especially strong and is getting a lot of attention because it is highly interdisciplinary and covers a lot of ground, spanning new nanoparticle technology development through preclinical testing in human tissues and advanced in vivo models.”

Nearly half of all saphenous vein grafts (a superficial leg vein used to bypass blocked coronary arteries) fail within 18 months because of inflammation and intimal hyperplasia—inward growth of cells in the vessel’s inner lining that can block blood flow to the heart.

That process is driven by a signaling pathway involving the protein MK2. While a highly specific, cell-penetrating peptide-based MK2 inhibitor is in clinical trials in Europe, its effectiveness is limited because it gets trapped in the cell, where it is degraded.

Brophy, Duvall and Evans developed nanoparticles that can deliver the peptide inhibitor to vascular cells while avoiding degradation. In animal models, it was effective at treating the problem with virtually no side effects.

The peptide is a very promising drug, Brophy says. They’re attempting to make it better by increasing its potency and durability in action so that the graft is protected while it recovers from the transplant procedure.

Further testing is necessary before human trials, but the approach may be useful for treating a wide range of disorders, including pathological vasoconstriction.

Recently, in the American Chemical Society journal ACS Nano, Brophy, Duvall and their colleagues reported that nanoparticle delivery of vasoactive peptides to isolated human vascular tissue prevented vasospasm, which can limit blood flow to the heart following coronary artery bypass. Vasospasm can also occur in the brain following a bleeding stroke. It causes nearly half of all strokerelated deaths.

Evans and Kyle Hocking, PhD’15, who earned their doctorates in biomedical engineering at Vanderbilt this year, led both studies. Their different skill sets helped the researchers cover a lot of ground, Duvall says. Those skills allowed the team to do basic nanoscience and technology development toward a real clinical problem with no current solution.

The work was supported by American Heart Association grant 11SDG4890030, a National Science Foundation Graduate Research fellowship to Evans, and a four-year exploratory/developmental research grant (R21 HL110056) to Duvall from the NIH.

Top Photo: A breakthrough in nanoparticle delivery made by a team that included former graduate student Brian Evans, PhD’15, and Professor Craig Duvall has been licensed and is undergoing further research. Above: Microscopy images show the peptide MK2i formulated in nanoparticles (MK2i-NPs).