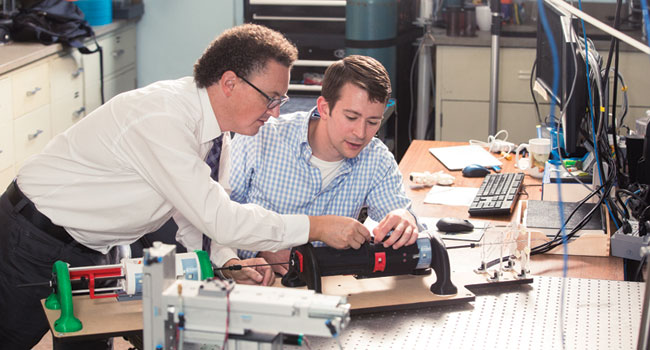 For those most severely affected, treating epilepsy means drilling through the skull and delving deep into the brain to destroy the small area where the seizures originate. It’s invasive, dangerous and comes with a long recovery period.

Five years ago, a team of Vanderbilt engineers wondered: Is it possible to address epileptic seizures in a less invasive way?

Because the area of the brain involved is the hippocampus, the engineers developed a robotic device that pokes through the cheek and enters the brain from underneath, a trajectory that brings the surgeon much closer to the target area. It also avoids the dangerous drilling through the skull. 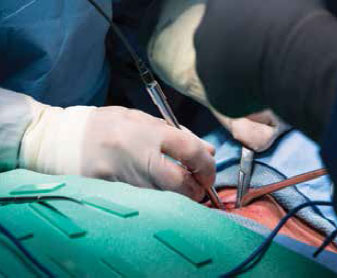 To accomplish this, they had to develop a shape-memory alloy needle that can be precisely steered along a curving path and a robotic platform that can operate inside an MRI’s powerful magnetic field.

The business end of the device is a 1.14 mm nickel-titanium needle that is compatible with MRIs and that operates like a mechanical pencil with straight and curved concentric tubes that allow the tip to follow a curved path into the brain. Using compressed air, a robotic platform steers and advances the needle segments a millimeter at a time.

According to David Comber, the graduate student in mechanical engineering who did much of the design work, they have measured the accuracy of the system in the lab and found that it is better than 1.18 mm, which is considered sufficient for such an operation. In addition, because the needle is inserted in tiny steps, the surgeon can track its position by taking successive MRI scans.

Associate Professors of Mechanical Engineering Eric Barth and Robert Webster headed the project. Barth says the next stage in the surgical robot’s development is testing it with cadavers. He estimates it could be in operating rooms within the next decade.

To come up with the design, the team began with capabilities that they already had.

Barth had done a lot of work in his career on the control of pneumatic systems. He knew they had the ability to have a robot in the MRI scanner. He and the team wondered what they could do that would have the highest impact.

At the same time, Webster had developed a system of steerable surgical needles. He recalls talking in the hallway with Barth one day and determining that Barth’s expertise in pneumatics could be combined with Webster’s steerable needles.

In discussions with Medical Center colleague Joseph Neimat, M.D., associate professor of neurological surgery, they identified epilepsy surgery as an ideal, high-impact application. Currently, neuroscientists use a through-the-cheek approach to implant electrodes in the brain to track brain activity and identify the location where the epileptic fits originate. But the straight needles they use can’t reach the source region, so they must drill through the skull and insert the needle used to destroy the faulty neurons through the top of the head.

Comber and Barth shadowed Neimat through brain surgeries to understand how their device would work in practice. Neimat says having a system with a curved needle and unlimited access would make surgeries minimally invasive. The impact would be dramatic: They would perform life-changing surgery with nothing more than a needle stick to the cheek.

The project is funded through the Center for Compact and Efficient Fluid Power, an NSF engineering research center for which Barth is a deputy director. The research is supported by NSF grant 0540834, sub award through the University of Minnesota T5306692601. The team recently won an NIH R21 grant and received past funding from Martin Ventures.

Top Photo: Professor Eric Barth and Ph.D. student David Comber use nickel-titanium steerable needles and pneumatics in their search for a minimally invasive surgical method to treat epilepsy. Right: Testing in the MRI.