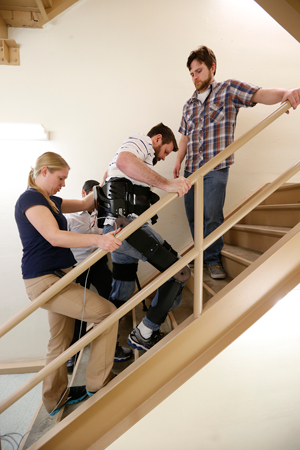 The U.S. Food and Drug Administration has given clearance to market and sell the powered lower limb exoskeleton created by a team of Vanderbilt engineers and commercialized by the Parker Hannifin Corporation for both clinical and personal use in the United States.

H. Fort Flowers Professor of Mechanical Engineering Michael Goldfarb developed the exoskeleton with a team of engineers and students in his Center for Intelligent Mechatronics.

“It is particularly gratifying because it is the first thing that has come out of my lab that has become a product that people can purchase, which hopefully will make a significant improvement in their quality of life,” Goldfarb said. 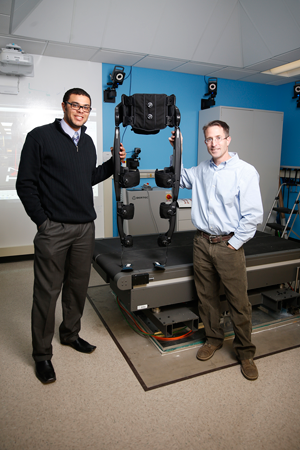 The Indego exoskeleton, which allows people paralyzed below the waist to stand up and walk, is the result of an intensive, 10 year effort. The initial development was funded by a grant from the National Institute of Child Health and Human Development. In 2012, Parker Hannifin, a global leader in motion and control technologies, purchased an exclusive license to market the design and has worked closely with Goldfarb’s group to develop a commercial version of the medical device.

The device acts like an external skeleton. It straps tightly around the torso. Rigid supports are strapped to the legs and extend from the hip to the knee and from the knee to the foot. The hip and knee joints are driven by computer controlled electric motors powered by advanced batteries. Patients use the powered apparatus with walkers or forearm crutches to maintain their balance.