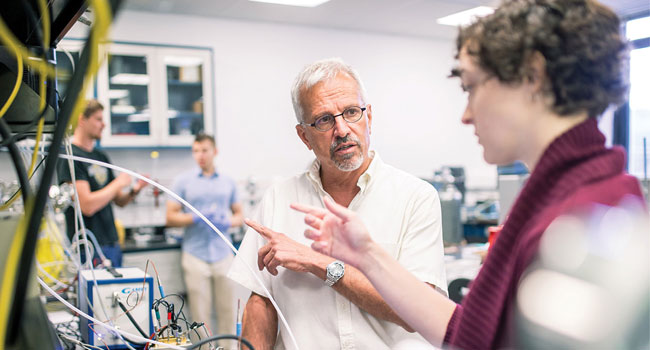 At the same time Honda and Toyota are introducing fuel cell cars to the U.S. market, a team of researchers from Vanderbilt University, Nissan North America and Georgia Institute of Technology have teamed up to create a new technology designed to give fuel cells more oomph.

The project is part of a $13 million Department of Energy program recently announced to advance fuel cell performance and durability and hydrogen storage technologies. Fuel cells in vehicles create electricity to power an electric motor.

The collaboration is based on a new nanofiber mat technology developed by Peter Pintauro, the H. Eugene McBrayer Professor of Chemical Engineering, that replaces the conventional electrodes used in fuel cells. The nanofiber electrodes boost the power output of fuel cells by 30 percent while being less expensive and more durable than conventional catalyst layers. The technology has been patented by Vanderbilt and licensed to Merck KGaA in Germany, which is working with major auto manufacturers in applying it to the next generation of automotive fuel cells.

Like a gasoline engine, fuel cells need fuel and air to run. But like a battery, they produce electricity. Fuel cells convert fuel to electricity with efficiencies ranging from 40 percent to 60 percent. There’s no moving parts, so they are quiet. The only waste product is water, so they are environmentally friendly.

Conventional fuel cells use thin sheets of catalyst particles mixed with a polymer binder for the electrodes—typically platinum on carbon powder. The Vanderbilt approach replaces these solid sheets with mats made from a tangle of polymer fibers that are each a fraction of the thickness of a human hair, providing a larger surface area of catalyst and higher fuel cell power while using less platinum—a costly material.

“Right now, much of the research work on fuel cell electrodes is very Edisonian,” said Pintauro. “It is mainly trial-and-error experiments. We don’t know what will happen when we change the composition or structure of the electrodes in hydrogen/ air fuel cells. With a better understanding of the interdependence of composition and nanostructure for fiber electrodes, we could accelerate the pace of our research, which would help us to achieve the cost and performance targets needed for automotive fuel cell commercialization.”

This work is supported by Department of Energy grant DE-EE0007653.