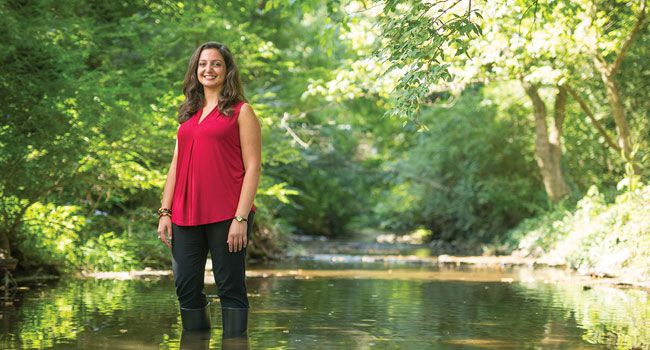 Researchers know climate change means extremes in temperature, rainfall and catastrophic storms. The mystery lies in just how devastating these conditions may be and how, particularly, they may affect the infrastructure we rely upon.

Assistant Professor of Civil and Environmental Engineering Hiba Baroud’s research lies in Bayesian statistics, where she can integrate multiple sources of information including historical data and expert knowledge to improve prediction accuracy. For example, in predicting the impacts of a flood on inland waterways and creating a recovery strategy, Baroud uses historical data such as weather, previous disruptions and the condition of the infrastructure. But she also uses information gathered from decision- makers and rescue workers who have managed recovery efforts for decades.

With the Trans Institutional Program award her team earned this year from the university, Baroud will use those statistical methods to build a foundation of knowledge that researchers can use to predict the risks around climate change and assess the resilience of utilities, roads and other systems. The consequences of inaction can be as severe as those seen in New York and New Jersey during Hurricane Sandy in 2012, when the superstorm washed out roads, flooded subway tunnels and knocked out the power grid.

Baroud also is looking at the nexus of water and energy and how climate change will affect that.

“We’re trying to find ways to produce energy from renewable sources, but in the upcoming years when we have less water, it will be more challenging to use it for that,” she said. “Also, with higher temperatures, we may be taking more showers or watering our lawns more often, increasing the demand as the supply decreases.”

With a better idea of what’s coming, governmentand private sector decision-makers can design infrastructure systems that protect against the elements without overbuilding or overinvesting.

Part of the challenge, Baroud said, is the fact that climatologists’ roughly 20 models for temperature and rainfall, which provide forecasts through 2065, are widely disparate. The potential effects on both human behavior and on infrastructure add another layer of complexity, which is why Baroud’s grant team includes a Vanderbilt climatologist and psychologist in addition to three other engineering professors.

“The key is having all of these groups talk to each other and building from there,” Baroud said. “Then engineers can find solutions to these shortfalls.”

The research is partially supported by a Vanderbilt University Trans-Institutional Program award.

Top Photo: Assistant Professor of Civil and Environmental Engineering Hiba Baroud pulls together a varied set of data and history with Bayesian statistics to better predict the devastation of floods and other severe events on infrastructure.