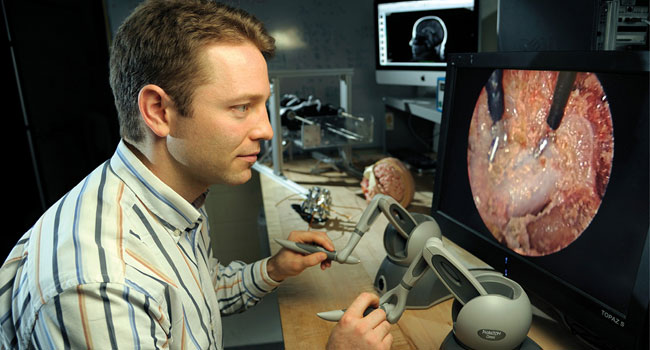 A tiny mechanical wrist developed by a team of engineers and doctors at Vanderbilt University was named as one of six new medical technologies to watch by the Wall Street Journal this summer.

A research team headed by Associate Professor of Mechanical Engineering Robert Webster in his Medical Engineering and Discovery Laboratory has developed a surgical robot with steerable needles equipped with wrists less than 1/16th of an inch (2 mm) thick. With the innovative wrist, the inventors hope to give needlescopic surgery a whole new degree of dexterity.

Needlescopic surgery, which uses instruments the diameter of sewing needles, is the ultimate form of minimally invasive surgery. The incisions required can be sealed with surgical tape and usually don’t leave a scar. However, the difficult technique is used by only a handful of surgeons around the world. 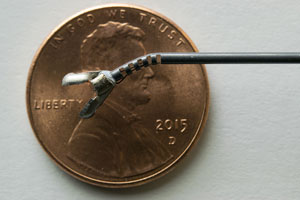 Webster’s new device is designed to provide needlescopic tools with a previously unknown degree of dexterity. Surgeon-operators will be able to perform procedures that haven’t been possible before, and the new system will reduce invasiveness through use of needle-sized instruments in areas such as the nose, throat, ears and brain.

“We knew this was a game changer,” Webster said. “The wrist lets the surgeon turn a corner with the end of the tool. It can work in a lot of different surgeries. We’re looking at transnasal brain surgery going through the nose up into the brain. This mechanical wrist lets us think outside the normal ways of doing these things.”

Webster’s needles can operate in areas of the body that neither manual endoscopic instruments nor Intuitive Surgical’s da Vinci robotic system can reach. “The smaller you can make surgical instruments the better … as long as you can maintain an adequate degree of dexterity,” said Professor of Urologic Surgery S. Duke Herrell, who is collaborating on the project. “In my experience, the smaller the instruments, the less postoperative pain patients experience and the faster they recover.”

The achievement is described in a paper titled “A Wrist for Needle-Sized Surgical Robots” presented in May at the International Conference on Robotics and Automation in Seattle. Vanderbilt University has applied for a patent on the design.

The research is partially supported by NIH grant R01 EB017467.

Top Photo: Associate Professor of Mechanical Engineering Robert Webster puts his latest invention a needlescopic surgical robot with tiny wrists through its paces. The invention will allow surgeons to perform procedures that hadn’t been possible.