Vanderbilt student rocketeers scored an unprecedented four-peat in May when they took home the top prize in NASA’s Orbital-ATK University Student Launch competition for the fourth year in a row, beating out 40 other university teams in the yearlong national competition.

This year’s challenge from NASA was to design rockets that can fly up to an altitude of 5,280 feet and carry a scientific payload that supports the development of the Space Launch System, the most powerful rocket NASA has ever built. According to Amrutur Anilkumar, director of the Vanderbilt Aerospace Design Laboratory, the secret to the Vanderbilt team’s success is two-fold: the quality and enthusiasm of the students involved and the multidisciplinary structure of the program, which attracts a dedicated group of graduate students who mentor the stream of undergraduates who participate. Career placement could also be a factor out of 60 program alumni, 35 have gone on to aerospace engineering positions, including eight at SpaceX.

Centers and institutes involved in the rocket program include the Institute for Software Integrated Systems, a national leader in cyber-physical systems that combines computers with sensors and mechanical systems; the Center for 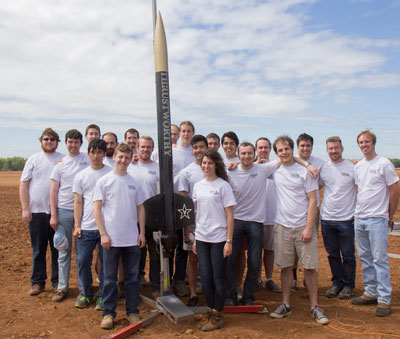 Intelligent Mechatronics, where the latest technology is used to develop the next generation of prosthetic devices; the Laboratory for Systems Integrity and Reliability, where nondestructive test procedures to evaluate complex materials and structures are being developed; and Peabody College’s Center for Science Outreach, which specializes in STEM outreach to Middle Tennessee K-12 schools.

Members of Vanderbilt’s Aerospace Club make field adjustments to their rocket, Trustworthy, at NASA’s annual student launch competition in April. Taking first place for the fourth year in a row makes them the most successful team in Vanderbilt history.