The multidisciplinary research that combines engineering, physics, and applied mathematics, conducted in Dr. Braun’s Laboratory, has been disseminated in top academic journals in the fields of robotics (IEEE Transactions on Robotics), control (Automatica), biomechanics (IEEE Transactions on Neural Systems & Rehabilitation Engineering), physics (APS Physical Review Letters) as well as in other science journals (AAAS Science Advances), and has been featured by several national and international news outlets, including The Guardian UK, Die Welt Germany, and The Conversation US, among others.

David Braun received his Ph.D. in mechanical engineering from Vanderbilt University, in 2009. From 2010 to 2013, he was a postdoctoral research fellow with the Statistical Machine Learning and Motor Control Group at the University of Edinburgh, and a visiting researcher with the Institute for Robotics and Mechatronics at the German Aerospace Center. In 2014, he joined the Singapore University of Technology and Design as a founding faculty. In 2019, he moved from Singapore to Vanderbilt University as an Assistant Professor of mechanical engineering, with a secondary appointment in computer engineering. 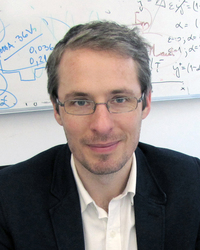