Dr. Julie A. Adams joined the faculty of the Electrical Engineering and Computer Science Department at Vanderbilt University in August 2003, founding the Human-Machine Teaming Laboratory at that time. Prior to joining Vanderbilt, Dr. Adams was an Assistant Professor of Computer Science at Rochester Institute of Technology (RIT). Before returning to academia, she worked in Human Factors for Honeywell, Inc. and the Eastman Kodak Company from 1995 to 2000. Dr. Adams was also an Adjunct Professor in the Computer Science Department at the University of Rochester from 1999 until she joined RIT.

Dr. Adams has published over 120 publications in the areas of multiple robot coalition formation, human-robot interaction, human-computer interaction, and complex human-machine systems. She has received the NSF Career Award and was a member of the DARPA Computer Science Study Panel. She is an associate editor for the IEEE Transactions on Human-Machine Systems, a senior editor of the Journal of Intelligent and Robotic Systems and serves on the editorial board of the Journal of Cognitive Engineering and Decision Making and the International Journal of Human-Computer Interaction. Dr. Adams served as a member of the National Research Council’s Army Research Laboratory Technical Assessment Review Panel on Solider Systems, the National Research Council’s NASA Technology Roadman Review panel, and the National Research Council/Naval Studies Board study on Unmanned Undersea Vehicles Committee. She has served as a member of the IEEE Systems, Man and Cybernetics Society's (SMCS) Executive Committee, having held various Vice President positions and as a Board of Governors member. She has also served on the IEEE Technical Activities Board's Society Review and Finance committees. Dr. Adams has served on several international conference organizing and program committees and was co-chair of the Human-Robot Interaction Steering Committee.

Dr. Adams received her Ph.D. degree in Computer and Information Sciences in 1995 from the University of Pennsylvania (Penn), performing her research on human-robotic interaction for multi-robot systems in Penn's General Robotics, Automation, Sensing and Perception (GRASP) Laboratory. She received her M.S.E. degree in Computer and Information Sciences from the University of Pennsylvania, and her B.S. in Computer Science and B.B.E. in Accounting from Siena College. 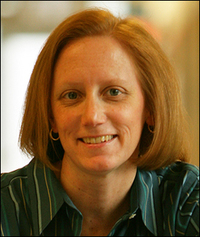