Dean Fauchet's current research interests are in photonics, energy, and the semiconductor/biology interface, all using silicon-based nanoscience and nanotechnology. His group has been involved in multidisciplinary projects including silicon-based light sources and lasers; silicon photonic crystal structures for optical modulation and switching; intra-chip optical interconnects; materials science and fundamental physics of nanoscale silicon objects; electrical and optical silicon-based biosensors; in-vitro and in-vivo cell growth on nanostructured silicon; silicon nanomembranes for particle separation; betavoltaic and photovoltaic applications of nanostructured silicon. In the past, he has also worked on ultrafast phenomena in semiconductors, superconductors, and polymers, ultrafast optoelectronics, optical characterization of semiconductors, and laser-solid interactions.

Philippe Fauchet has more than 30 years of experience in silicon photonics, nanoscience and nanotechnology with silicon quantum dots, biosensors, electroluminescent materials and devices, and optical diagnostics. His research on porous Si and nanoscale Si, and their application to LEDs and displays, biosensors, nanoelectronic devices, solar cells, and optical interconnects has led to dozens of plenary, invited, and contributed publications, and numerous invited conference presentations and seminars in North America, Japan, and Europe.  He has chaired many symposia and conferences devoted to various topics in his field of interest, and given many tutorials and short courses. In the 1980's, Fauchet was one of the originators of Princeton University's Center for Photonics and Opto-Electronic Materials. In the 1990's, he created and ran the Femtosecond Laser Facility at the University of Rochester's Center for Optoelectronics and Imaging. In 1998 he created the Center for Future Health, and in 2007 he created the Energy Research Initiative, both at Rochester. At Princeton, he received an IBM Faculty Development Award in 1985, an NSF Presidential Young Investigator Award in 1987, and an Alfred P. Sloan Research Fellowship in 1988.  At Rochester, he received the 1990-1993 Prix Guibal & Devillez for his work on porous silicon. Fauchet is the author of more than 400 publications, and has edited 14 books. He is a Fellow of the Optical Society of America, the American Physical Society, the Materials Research Society, the Institute of Electrical and Electronic Engineering, the International Society for Optical Engineering (SPIE), the American Association for the Advancement of Science, the National Academy of Inventors, and serves on various boards for industrial and governmental entities. Fauchet holds numerous patents and has founded one successful startup. 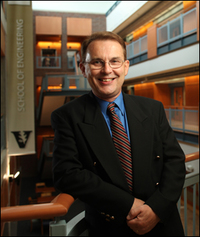