The Nashville Mini Maker Faire, held for the first time at The Wond’ry, attracted more than 4,000 visitors and 93 exhibitors – a jump in attendance of more than 50 percent and double the maker participation over 2016.

At least 25 percent of the exhibits had Vanderbilt ties and many of them involved students, organizations and labs from the School of Engineering, which was among the sponsors. A sampling: 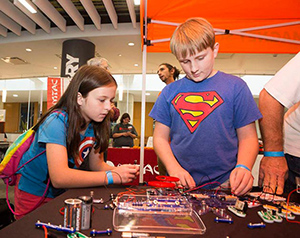 “It was terrific to bring so many people with different experience and talents together,” Galloway said. “I’ve heard many people sharing information on how they produce their work.”

Galloway, also an assistant research professor of mechanical engineering, had an exhibit of his own as well. He showcased the technology that that inspired Baymax from Big Hero 6 – soft robotics, an emerging field that creates actuators and sensors from elastomers and textiles. Visitors at the booth could handle and pump up soft actuators.

The Advanced Robotics and Mechanism Applications (ARMA) lab, which is affiliated with the Vanderbilt Institute for Surgery and Engineering, had two offerings. A “drawing robot” that ARMA students have used during a Harpeth Hall “Winterim” class captured the kids’ attention, said Long Wang, a Ph.D. candidate in mechanical engineering. 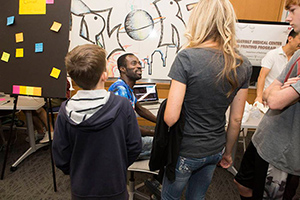 Visitors of all ages streamed into the Wond’ry on Saturday and Sunday to see everything from making wool yarn, origami and costumes to robots, supercomputers and a singing Tesla Coil. It was the largest event in the faire’s five-year history.

Miranda Nelson, the faire’s producer, said attendees enjoyed the opportunity to experience the Wond’ry, Vanderbilt’s center for making and entrepreneurship.

“I want to thank everyone involved, including the Vanderbilt personnel who handled facilities, parking, maintenance and cleaning, plus all the Wond’ry staff and student volunteers,” she said. “We couldn’t have done it without you.”