How much more development can Nashville sustain?

Nashville has been on a roll, but Music City faces significant challenges to additional development, including high land prices, limited mass transit, increased traffic congestion, and a shortage of affordable housing for renters as well as homeowners, according to experts gathered for the 8th annual Construction Management Symposium.

Hosted by the Department of Civil & Environmental Engineering and the Construction Management Program, the daylong event Thursday included a Q&A with former Nashville Mayor Karl Dean, who recently announced a run for governor.

Sanjiv Gokhale, School of Engineering professor of the practice of civil engineering and director of graduate studies in construction management, didn’t toss many softballs. He asked Dean about the failed AMP light rail project, gaps in affordable housing, and large tax incentives his administration granted.

Dean became Nashville’s mayor less than a year before the U.S. slid into “The Great Recession.” With joblessness increasing and property values falling, economic development became a priority, he said.

“None of us want to give incentives but you have to be able to compete,” Dean said. “It is better to have the budget pie growing rather than shrinking or remaining stable.”

“You don’t say yes to everybody,” he said. 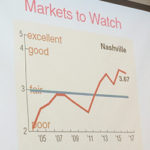 “Nashville used to be a low-cost city of moderate quality. Now it is a moderate-cost city of high quality,” Miller said. “The math equation is becoming harder and harder to work.”

But Music City is far from cooked. Expect more commercial development, including renovation of existing properties, in the Gaylord Opryland corridor, Antioch, the Hickory Hollow area, as well as near the airport, they said.

This year’s event was titled “Nashville: Still the ‘IT City.’” The symposium attracts some of Middle Tennessee’s biggest names in development and sells out every year because it’s known for accurate market forecasts for the construction industry.