Michael Miga has been appointed to serve a four-year term on the Bioengineering, Technology, and Surgical Sciences Study Section of the National Institutes of Health Center for Scientific Review beginning July 1, 2017. 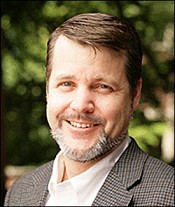 Miga is the Harvie Branscomb Professor at Vanderbilt, and professor of biomedical engineering, radiology and radiological sciences, and neurological surgery. He is director of the Biomedical Modeling Laboratory, one of 10 affiliated labs within the Vanderbilt Institute for Surgery and Engineering. He is a co-founder of VISE.

The BTSS Study Section reviews grant applications in the interdisciplinary fields of surgery and bioengineering to develop innovative medical instruments, materials, processes, implants, and devices to diagnosis and treat disease and injury. Within BTSS there is a balance between basic, translational, and clinical research and application and development of emerging cross-cutting technologies relevant to surgical systems.

“BTSS is this incredibly unique review panel that reviews the work of investigators engaged over a broad array of medical robotics, instruments and devices, and materials all cast within the area of surgery and intervention,” Miga said. “Some of the best minds in the world are submitting their cutting-edge work that cuts across basic, translational, and clinical domains. I am very excited to serve, and advocate as well, for these wonderful contributions to science, engineering, and medicine!”

The Center for Scientific Review ensures that NIH grant applications receive fair, independent, expert and timely reviews, allowing the NIH to fund cutting-edge research that can lead to new treatments. The NIH is the largest source of funding for biomedical research in the world, and the NIH peer review model relies on partnerships with academic medical schools.

Miga also will make recommendations on these applications to the appropriate NIH national advisory council or board, and survey the status of research in their fields of science.

Miga was nominated because of his “demonstrated competence and achievement in their scientific discipline as evidenced by the quality of research accomplishments, publications in scientific journals, and other significant scientific activities, achievements and honors.”

“Service on a study section also requires mature judgment and objectivity as well as the ability to work effectively in a group, qualities we believe Professor Miga will bring to this important task,” said Richard Nakamura, director of the Center for Scientific Review, in his letter of invitation to serve.

“As a researcher who has devoted his career to innovating new technologies at the intersection of surgery and engineering, I think Professor Miga is an outstanding choice to serve on the BTSS Study Section,” said Michael King, J. Lawrence Wilson Professor of Engineering, professor and chair of biomedical engineering. “Providing rigorous but fair evaluations of research proposals submitted to the NIH is an intensive but critical service to our profession.”

Miga’s research interests are in image-guided surgery, computational modeling for therapeutic applications, and inverse problems in therapeutics and imaging. He has been awarded multiple NIH grants concerned with image-guided brain, liver and breast surgery. He also is the program director of a novel NIH funded training program focused at training engineers to create novel technology platforms for treatment and discovery within surgical and interventional environments.  He recently served four years as a charter member of the Biomedical Imaging Technology Study Section at the NIH.

In 2014, Miga was inducted into the American Institute for Medical and Biological Engineering College of Fellows representing the top 2 percent of medical and biological engineers.