That robotic exoskeletons can improve mobility of people with disabilities and enhance human performance is widely understood. The same has not yet been true for how to best measure and optimize the interactions between individuals and such robotic devices.

But the science of human-exoskeleton interaction just got a big boost. Vanderbilt School of Engineering researchers, in collaboration with Harvard University, have developed a new method to measure how energy generated by a soft robotic exoskeleton (called an exosuit) is transferred from the device through biological soft tissues to assist human movement. Their method provides a quick, inexpensive approach to quantify human-device interaction dynamics, which will allow robotic, exoskeleton and exosuit engineers to test and improve their designs more rapidly.

Yandell is the lead author on their new paper “Physical interface dynamics alter how robotic exosuits augment human movement: Implications for optimizing wearable assistive devices,” which was published May 18 in the Journal of NeuroEngineering and Rehabilitation. The Harvard researchers are Conor Walsh, Brendan Quinlivan and Dmitry Popov.

“Movies and comics depict Ironman. But without understanding and designing an appropriate interface you may just end up with a squishy ‘man’ inside an ‘iron’ suit,” Zelik said.

The soft tissues of the human body complicate the timing and magnitude of energy transfer, as well as the ability of researchers to measure it. So do interfaces, whether straps or sleeve-like casings, that attach assistive devices to people. Interface materials can stretch and slip along the skin. The tissues themselves may also stretch, compress, or interfere with optimal device placement in relation to the biological joints getting the help. 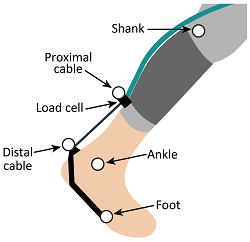 Consider the automobile as an analogy.

What makes the new findings significant is their use of common force and motion measurements to quantify energy transmission and to isolate the effects of device interfaces.

“For researchers, this method provides a roadmap to get more meaningful information from data they’ve already collected – or will collect, as device designs and interfaces change,” Yandell said.

The study suggests the need for careful attention to ways that wearable robotic devices are physically attached to the body.

“Interfaces can absorb and return large amounts of energy, sometimes in unexpected ways,” he said.

In an unrelated 2016 study, for example, researchers found that 50 percent of the mechanical energy from a running exoskeleton was absorbed (lost) due to soft tissue motion, interface dynamics and how the device moved relative to the user’s body.

In this study, the Vanderbilt-Harvard team used a soft robotic ankle exosuit.  Boosting ankle mechanics has broad application because the human ankle is one of the main energy generators during walking. Use of such devices could keep older adults more active longer, improve productivity of workers, and enhance the quality of life for people with impaired mobility.

Components of this exosuit include a backpack-mounted controller/actuator; a cable that transmits actuator force and energy to the ankle; an interface that attaches the cable to the person’s shank; and a modified boot to allow energy output from the device to assist with rotating the human ankle, aids pushing off the ground during walking. 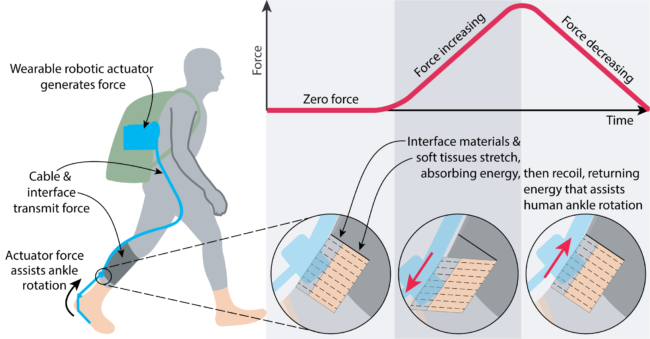 They laid out the biomechanical calculations for energy analysis at each interface, which allows researchers to identify weak spots in their designs and to skip time-consuming preliminary component-by-component testing that has been used to evaluate interface dynamics.

“Our new method provides unique insight that will help engineers to optimize how exoskeletons are designed and controlled, and how these wearable devices are attached to the body, to ultimately maximize human health, safety and performance, like in the movies,” Zelik said.