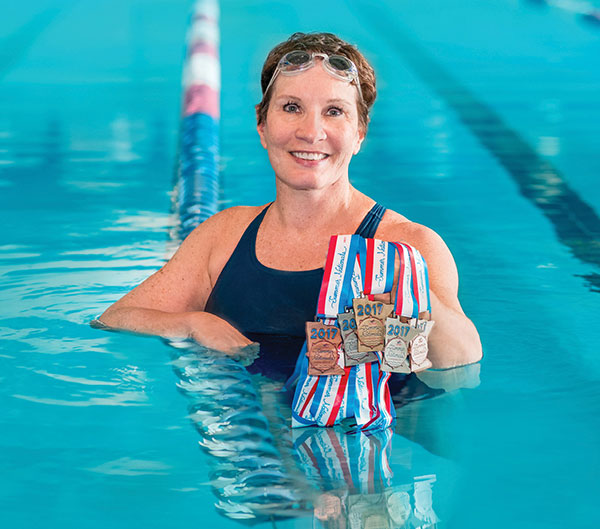 A nationally competitive swimmer in her 60s, Jan Hildebrandt, BE’79, trains at Superior Athletic Club in Medford, Oregon. (FRIZZSTUDIO.COM)

Jan Diner Hildebrandt retired from competitive swimming the day her senior season ended at Vanderbilt. Or so she thought. Nearly 40 years later, Hildebrandt, a 1979 electrical engineering and math graduate, found herself competing in the U.S. Masters Swimming Nationals, a long-course pool meet featuring the best amateur adult swimmers from across the country.

“Other than playing with my kids in the pool, I never swam after college,” says Hildebrandt, who worked in electrical engineering and marketing for 3M before retiring in 2014. “I never swam competitively. Never worked out in the pool.”

That changed after Hildebrandt was forced to undergo knee replacement surgery five years ago at the age of 56. “Swimming was the best rehab for my knee,” she says. “I couldn’t do much else, so I swam.”

And she swam quite well—so well, in fact, that her husband, Larry, himself a former collegiate swimmer, recommended that she start swimming competitively again.

“He said, ‘You’re pretty good. You would place nationally if you want to work at it,’” she recalls. “He really encouraged me to do it. He gave me workouts and a plan.”

After getting back into shape, Hildebrandt began swimming in some U.S. Masters Swimming events near her home in Medford, Oregon, to see where she ranked locally. Success in those events then led to her first trip to nationals in 2016, where she competed as a 59-year-old.

“I wanted to get a gauge on what it would be like to swim events that I’d never swum before,” she says. “I used to be a sprinter—a butterflier and a freestyle sprinter. Now I’m swimming long IMs and long-distance butterfly events.”

She flourished during her second trip to nationals in the summer of 2017, partly because she was in better shape but also because she was a year older, ironically enough. “I aged up [to the 60–64 group]. It’s best in this part of your life to be the youngest in your age group,” she says with a laugh.

Hildebrandt placed in the top 10 in all her individual events and anchored the 200-meter medley relay team that won the national championship. Her Oregon team placed fourth overall in the nation and third in the women’s division.

“It was pretty much a shock to do as well as I did,” she says. “Being part of the relay team that took home the national championship was a great honor and a fun celebration with close friends.”

But that wasn’t the first time Hildebrandt and some friends had enjoyed a milestone victory in the world of swimming. In the mid-1970s, as a student at Vanderbilt, she was part of a group that sued the university to start a women’s swimming program.

“A number of us got together and said, ‘This is kind of crazy. We all want to swim, but we don’t have a team,’” she says. “The group hired a law student—this was during the time of Title IX—and the law student helped us legally approach the university.”

Hildebrandt is quick to point out that it was hardly an acrimonious legal matter.

“It didn’t take much of an effort except showing an interest,” she says. “Vanderbilt soon hired a women’s athletic director [Emily Harsh, ’60] and started a women’s swimming and diving team.”

Hildebrandt also was rewarded financially for her trailblazing efforts. “That was another thing the school did—they put some of us on scholarship,” she says. “I was one of the first female recipients of a partial athletic scholarship, which was neat.”

Though she mainly concentrated on diving while at Vanderbilt, Hildebrandt did compete in several swimming events as a student-athlete, turning in some impressive times. And how do those compare to her times today?

Not bad after an almost 40-year break.