Getting robotic surgical tools from the lab to the operating room


The path from university lab to commercialization is especially complex in the biotech industry. Challenges range from long lead times, sometimes measured in decades, to the costs of transforming ideas into innovations, as well as issues of intellectual property, patenting and licensing.

Yet Nabil Simaan, a mechanical engineering professor who specializes in designing robots to help surgeons perform operations in areas of the body that are hard to reach, does not deter easily. He has years of experience working collaboratively with commercial entities while collecting numerous patents—three  in 2017 alone.

“A key focus of the research is the design of intelligent robotic devices that can sense and regulate their interaction with the anatomy,” Simaan said. “These robots can be used collaboratively with a surgeon to safely excise or ablate tissue.”

Simaan is co-inventor of the Insertable Robotic Effector Platform. IREP—a portfolio of multiple patents—is believed to be the world’s smallest robotic system and was hailed as a medical science breakthrough in 2013. It is licensed to Titan Medical and led to the development of the Titan SPORT system for single-port access surgery.

The minuscule robotic surgical tool enters the body through a remarkably small incision—six-tenths of an inch, or 15 millimeters. Once inside the body, it unfolds to reveal a camera system for 3D visualization and imaging feedback, and two snakelike arms that perform the surgery.

IREP has gone through several development stages. First, Columbia University computer scientist Peter Allen devised an insertable camera that tilted, panned and followed the movements of surgical instruments from inside the abdomen, and projected its vision onto a computer screen. Surgeon Dennis Fowler at Columbia performed a number of appendectomies, nephroscopies and other operations on porcine models using the technology.

At Vanderbilt, Simaan equipped IREP with two snakelike arms built from a series of push-pull flexible beams that can bend and twist the arms in the required directions. Simaan also gave IREP wrists and grippers to manipulate objects. Vanderbilt University Medical Center urologist Duke Herrell, a professor of urologic surgery and biomedical and mechanical engineering, collaborated with Simaan in testing the IREP.

“Typically, as a research lab, we try to be at least 10 years ahead of industry to help usher in new approaches to surgery via new technologies,” he said. “But university researchers and industry are catching up.” Simaan moved the ARMA lab to Vanderbilt when he joined the engineering faculty in 2010. 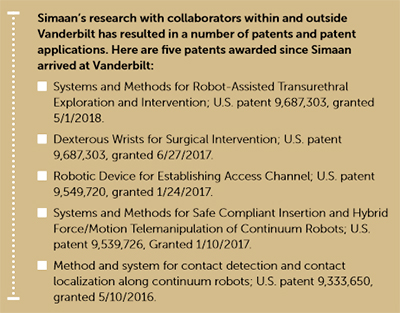 The latest ARMA tech—a prototype robot system to remove bladder tumors—shows great promise, having proved successful in animal studies. The research, recently published by the Journal of Endourology, earned a best paper award, which will be received at the 2018 Engineering and Urology Society conference.

Among all cancer diagnoses, the incidence of bladder cancer ranks fourth in the United States and seventh worldwide in males. “Bladder cancer also is very expensive to treat. It requires repeat resections because surgeons remove a bladder tumor ‘piecewise’ and that often results in recurrence and more surgeries,” Simaan said.

Simaan and his team developed a transurethral robot platform called TURBot. It is the first endoscopic robotic system to provide full surgical coverage with visibility of the bladder, including the neck and dome, and the first to have been evaluated during in vivo animal experiments.

Simaan and two former students have co-founded a startup to develop such technologies for robot-assisted transurethral resection of bladder tumors.