America as a whole is losing its passion for science, a trend that jeopardizes biomedical advancements to cure disease, ease suffering, and improve lives, the head of a top academic association said Wednesday.

“If we want science and medical innovation to once again define what America wants to be then we have to make it happen,” said Milan Yager, executive director of AIMBE, the American Institute for Medical and Biological Engineering. “Get out from the lab and get engaged.

“The time has come to stop seeing ourselves as victims rather than active players,” he said, calling for a new level of engagement and advocacy.

Yager spoke as part of the Department of Biomedical Engineering seminar series and drew a packed crowed of undergraduates, graduate students and professors. 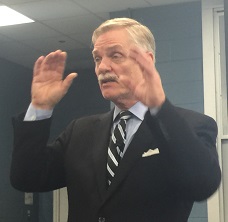 Since 1970, 80 of the top 100 innovations people use daily – from GPS to scratchless eyeglass lenses to lithium ion batteries and common vaccines and drugs – have come from federally funded research, he said.

The National Institutes of Health has been the “lifeblood of innovation,” and 93 NIH-funded researchers have won Nobel Prizes. For decades innovation and advancement has been a partnership of the federal government and research universities but we cannot sit idle and assume it will always be so, Yager said.

He cited a 17 percent across-the-board cut in NIH funding in the President’s budget; a precipitous drop in the funding of young researchers; and a distrust of science among many Americans motivated by personal economics rather than the bigger picture.

The U.S. spends $25 to take care of people who are sick for every $1 it spends on research for cures for , said Yager. University researchers must step up, explain why their work matters, connect it to a real person with a name, and tell the story, he said.

He urged students and professors to register to vote, attend town hall meetings, go to the polls, write emails and letters, attend and organize rallies and get serious.

Already, the United States has fallen out of the Top 10 list of countries in research and development investment as a percentage of Gross National Product, he said. The change from 2000 to 2013 ranks the country 18th, far behind Korea, China, Japan, and Turkey.

“Don’t tell me one vote doesn’t matter,” said Yager, who suggested it was time for science to have its “Rosa Parks” moment. “We’ve got to take back our government. When are those of us who care about medical research going to decide ‘enough is enough?’ ”

“Does anybody really care whether America really is the most innovative country in the world?” Yager asked. “With so much shouting and nasty noise in public discourse… we as Americans are better than that. Our mission is much more important.”