Autonomous vehicles are coming. That much is clear.

Far less clear “is when, at what rate, and through what evolution path,” said Hani S. Mahmassani, the William A. Patterson Distinguished Chair in Transportation at Northwestern University.

Mahmassani, also director of the Northwestern University Transportation, was among three keynote speakers who joined experts from Vanderbilt, the City of Nashville, other universities and transportation agencies for a daylong event to address mobility and traffic congestion challenges in Nashville.

The Jan. 19 Multi-Modal Mobility workshop was sponsored by the Vanderbilt Initiative for Smart Cities Operations and Research (VISOR). The program, with presentations in the morning and working sessions in the afternoon, spanned traffic modeling, societal-scale cyber-physical systems, public transportation incentives, degrees of connectivity, and routing apps such as Waze that divert traffic through neighborhoods. The group also got an overview of land-use planning at Vanderbilt from Eric Kopstain, the university’s vice chancellor for administration, and a look at Let’s Move Nashville, Nashville Mayor Megan Barry’s transit plan, from city officials.

The speed with which autonomous vehicle development, navigation and routing apps, services such as Lyft and Uber, and shared car and bicycle options already have changed the transportation landscape cannot be overstated. Yet these components, for the most part, act as separate islands without coordination. 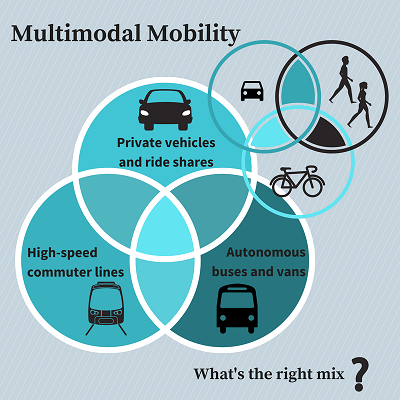 “A lot of the components falling in place but how can you get the components to work together as a system? Mahmassani said. “Agencies are at a loss. There is nothing in the tool kit.”

As a start, transit agencies should think of themselves as mobility providers, he said.

“Invest in your corridors,” because that is where public transportation as we’ve known it can provide efficient, high-capacity, high-speed options, Mahmassani said. Low density areas can be serviced by driverless vehicles, existing and new rideshare services, and other models likely to develop.

Metropolitan areas can invest in fleets of smaller buses or vans; or public-private partnerships – contracted, co-branded or some combination – can meet the needs of users for what traffic planners call the “first mile/last mile” access.

Although individual vehicle ownership will not vanish, “new models of ownership/operation reflect more flexible forms of service delivery through a great role for private sector and public-private agreements,” he said.

Bayen talked about using game theory algorithms to improve traffic flow and what factors influence decisions drivers make in large urban areas. Ratliff highlighted cases studies – some that succeeded and others that did not – that leveraged new data streams and incentive design to improve traffic congestion as well as expand mobility access.

VISOR, funded by a Vanderbilt TIPs grant in 2016, is working with Metro Nashville agencies to develop a technical and policy platform that enables living city labs to tackle challenges the city and its peers face.