Run 50% faster—with a spring in your step 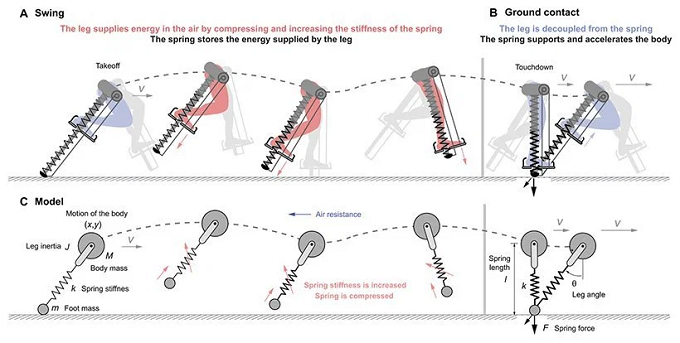 Running feet take turns hovering in the air for the briefest of moments. During that time, the airborne foot does nothing to advance the cause of running.

But what if it could?

A pair of Vanderbilt engineers has proposed a pogo stick-like device that takes advantage of the airtime, allowing humans to run nearly twice as fast as is possible naturally.

The invention, an exoskeleton worn on the legs, would add cycling mechanics to the human body and enable people to approach top cycling speeds.

To leverage the continuous motion of bike pedaling, David Braun, Ph.D.’09, assistant professor of mechanical engineering, and graduate student Amanda Sutrisno designed the theoretical exoskeleton device to allow the legs to supply energy while in mid-air. They realized that a device strapped in parallel to each leg and housing a robotic spring could achieve the same technological advances as a bicycle.

Here’s how it works: During a stride, the device springs compress and release in time with the motion of the legs, allowing one spring to contract when the leg pulls up into the air and the other to extend as it comes into contact with the ground.

Their study, “How to run 50 percent faster without external energy,” appeared in Science Advances.

“While bicycles rely on human energy the same as running, cycling is faster because of the energy-efficient processes engaged while on a bike,” Braun said. “Our lab took those processes and sought a way to more effectively augment human performance.”

Existing devices with springs, such as jumping stilts, reduce the energy losses when runners step, but do not support the body or allow the legs to move the body forward while in the air. This device could not only support the body but also allow the legs to provide energy in the air so runners can use all their leg power as when pedaling the bicycle to accelerate, meaning they can run faster than ever.

The researchers are working on a prototype device but face a hurdle: Existing materials such as carbon fiber lack the energy-holding capacity needed to propel a runner to such speeds. Something new must be developed to fully test the idea.