Vanderbilt University is ranked 36th in a 2019 U.S. patents report released by the by the National Academy of Inventors (NAI) and the Intellectual Property Owners Association (IPO). The report uses data obtained from the U.S. Patent and Trademark Office (USPTO) and highlights the vital role patents play in university research and innovation. 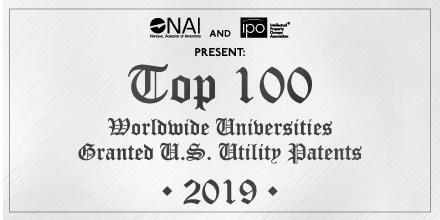 Published annually since 2013, the report ranks the top 100 universities named as first assignee on utility patents granted by the USPTO in the 2019 calendar year. The full report can be found here.

“The institutions included in this year’s report are leading innovation worldwide through their encouragement of academic discovery and invention,” said Paul R. Sanberg, president of the NAI. “We are proud to collaborate with the IPO for the eighth consecutive year to highlight universities that have made critical contributions to society.”

“University patents ignite a culture of growth and innovation which in turn stimulates the economy,” said Jessica Landacre, executive director at the IPO. “The Top 100 Worldwide Universities Granted U.S. Utility Patents demonstrates which institutions excel in this arena.”

There are 57 member institutions of the NAI represented this year in the Top 100. They hold an aggregate total of 4,685 patents spanning a wide variety of fields, such as medicine, technology, and engineering. The IPO Top 300 Patent Owners List, published annually since 1985, ranks organizations worldwide that received the most U.S. utility patents during the previous calendar year.

About the National Academy of Inventors
The National Academy of Inventors is a member organization comprising U.S. and international universities, and governmental and non-profit research institutes, with over 4,000 individual inventor members and Fellows spanning more than 250 institutions worldwide. It was founded in 2010 to recognize and encourage inventors with patents issued from the U.S. Patent and Trademark Office (USPTO), enhance the visibility of academic technology and innovation, encourage the disclosure of intellectual property, educate and mentor innovative students, and translate the inventions of its members to benefit society. The NAI works collaboratively with the USPTO and publishes the multidisciplinary journal, Technology and Innovation. www.academyofinventors.org.

Contact: The Vanderbilt Center for Technology Transfer and Commercialization, 615 343-2430