Taking a load off

Soldiers often carry 100 pounds or more in combat–weapon, ammunition, water, batteries, and more, plus the weight of a helmet, body armor, and other protective gear.

The extra weight comes at a cost, and back injuries are a big one. The U.S. Army Public Health Center estimates an annual count of nearly 100,000 back overuse injuries, conditions that degrade the health, effectiveness, and readiness of soldiers. 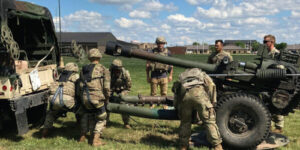 To help take a load off, improving the health of soldiers and the success of missions, the Army has turned to a Vanderbilt mechanical engineering professor and colleagues who

developed a soft exoskeleton, or exosuit, to reduce back strain for warehouse workers. Through the Army Research Laboratory and the Civil-Military Innovation Institute, the Army Futures Command has invested $1.2 million in development of an exosuit. It marks the agency’s first Pathfinder Project award.

Pathfinder will support the work of Associate Professor of Mechanical Engineering Karl Zelik and soldiers of the 101st Airborne Division at Fort Campbell. The concept, known as the Soldier Assistive Bionic Exosuit for Resupply, or SABER, will expand on more than two years of informal design sprints, interviews, and field exercises between Zelik’s team and soldiers of the 101st to understand their needs and support field artillery missions.

The goal is a prototype exoskeleton for soldiers that will augment lifting capabilities and reduce back strain. According to the U.S. Army Public Health Center, more than 1,000 musculoskeletal injuries are diagnosed in the Army every day, and about a quarter of those are back overuse injuries that degrade the health, effectiveness and readiness of soldiers.

A big design challenge will be how to best integrate an exosuit with Army uniforms and gear. HeroWear, the startup Zelik founded, has produced small batches of its Apex exosuit, which is in use in the warehouse, logistics, agriculture, construction, and retail industries. In nearly all cases, however, the user is only wearing a shirt and/or a t-shirt.

“Soldiers wear a lot of other gear,” Zelik said. “The issue is how do you attach it without interfering with the other equipment?”

Additionally, soldiers need speed and agility during a far wider range of motions–running, crawling, jumping, rolling among them. “It takes the design to another level,” Zelik said.

The SABER team’s ability to leverage lessons from development and iteration of the Apex exosuit and HeroWear’s translation of the technology to a commercially available product make it an ideal fit for the Pathfinder program. The Pathfinder program supports collaborations between researchers and creative soldiers to rapidly innovate high-impact, research-based technologies with a path to commercialization and prompt acquisition of products by the Army.

This is the first Pathfinder grant the Army Futures Command has made.

The project is part of the Soldier-inspired Innovation Incubator, which calls on Vanderbilt University and Vanderbilt University Medical Center researchers in engineering, education, neuroscience, emergency medicine, ophthalmology, management, and other domains to partner with each other, as well as with soldiers and private industry.

Daniel F. Flowers Professor Doug Adams, who directs the incubator, called the university’s partnership with Army “a once-in-a-generation opportunity to totally transform the Army’s approach to research and development and technology transition.”

“We are building a new model for research and development that is soldier-inspired, that connects the researcher to the stakeholder in ways that heretofore have never been attempted and, most importantly, in ways that quickly provide transformative research-based technological solutions that advance national security interests and improve soldiers’ lives,” said Adams, who chairs the Department of Civil and Environmental Engineering.