The historic rain and flash flooding that swept central Tennessee on Saturday, Aug. 21, 2021, devastated the small city of Waverly, about 60 miles west of Nashville. A flash flood watch issued Friday quickly became a “flash flood emergency” Saturday. On Wednesday, Sept. 25, Humphreys County officials said 20 people died and all those missing had been accounted for. 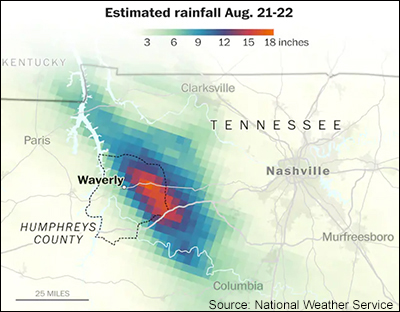 The Tennessee Emergency Management Agency called the torrential rain and flooding “catastrophic.” One observation site recorded 17 inches of rain in 24 hours, blowing past the state’s nearly 14-inch record set in 1982, a meteorologist said. This tragic flood and other extreme weather events around the country stoke concerns that the changing climate is making natural disasters more frequent and more intense.

Vanderbilt professor and civil engineer Janey Camp investigates the impacts of climatic change and natural hazards on transportation and water infrastructure systems for the Tennessee Department of Transportation, the Federal Highway Administration, the U.S. Army Corp of Engineers and others with a primary focus on improving resilience and adaptation planning. “Americans who often associate climate change with melting glaciers and intense heat are not prepared for these types of highly localized occurrences. We often think of these disasters as happening to someone else far away or in a distant future,” she said.

“A warmer atmosphere that holds more water, combined with increased development and crumbling infrastructure that cannot keep pace, is turning once-rare disasters into common occurrences. These events are hitting local and diverse communities hard and vulnerable members of those communities even harder,” said Camp, research associate professor of civil and environmental engineering and associate director of the Vanderbilt Engineering Center for Transportation and Operational Resiliency.

“Tennessee may be a landlocked state, but we have a lot of surface waters like rivers and streams and tributaries to the rivers and streams. But, we also see flooding in areas that are not attached to a river or stream and sometimes those are low-lying areas are where a lot of precipitation accumulates,” she said. “Often, we don’t have adequate stormwater infrastructure and drainage to convey that water away.”

Camp said utilities, public works departments, local governments and state agencies managing infrastructure are struggling to make ends meet. “It’s more about fix what you can with the resources you have as opposed to looking long term.” She is a member of the Tennessee Geographic Information Council and the Association of State Floodplain Managers.

Camp is a licensed civil engineer in the state of Tennessee and actively participates in the American Society of Civil Engineers, including working for nearly a decade on ASCE’s Infrastructure Report Card, the Transportation Research Board, the TennSMART consortium, and has served on Nashville Mayor John Cooper’s Sustainability Advisory Committee.