Headband device developed for home use with young ADHD patients


A Vanderbilt biomedical engineering professor has developed a prototype headband to measure brain activity that could have widespread application in studying and ultimately treating ADHD and other neurological disorders.

The device is lightweight, portable, and inexpensive to construct. Prototype components cost less than $250, compared to costs exceeding $10,000 for commercial systems.

Audrey Bowden, associate professor of biomedical and electrical engineering, and Hadi Hosseini, a colleague at Stanford University, set out to develop a simple device that children and teens diagnosed with attention deficit disorders could wear at home. Their initial prototype is a single-channel functional near-infrared spectroscopy (fNIRS) headband. Functional neuroimaging is a general term for technologies that spatially map brain activity over time.

The team is now optimizing a newer, 17-channel version, which weighs five ounces with its battery pack, plus an accompanying mobile application for use with a phone or tablet. The next step is testing the device with 30 children diagnosed with ADHD and 30 control subjects. ADHD will serve as the model illness, with eventual application to other neurological conditions such as traumatic brain injury, epilepsy, stroke, ADD, and dementia.

“Successful completion of this first-of-a-kind study will help shift the current paradigm away from in-lab, small-quantity neuroimaging and pave the way for developing effective biomarkers that can be used clinically for diagnosis and early detection of mental disorders, as well as monitoring the response to treatment,” Bowden said.

In addition to the mobile app, Bowden and her research group are developing an augmented reality interface to guide positioning of the device when used at home and other natural environments. 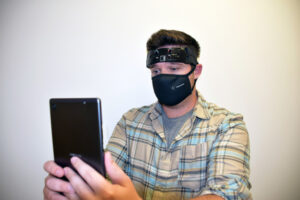 “It is one thing to have the device, and it is another thing to use it reliably,” said Bowden, who is the Dorothy J. Wingfield Phillips Chancellor’s Faculty Fellow. “Traditional fNIRS systems require expert researchers to place the device on prospective participants. Our AR-based technology would enable use of the device in contexts where the researcher isn’t there, such as in the home. The flexibility added by the self-positioning option would open the door to more frequent assessment and more reliable information about mental disorders.”

Significantly, all the research—device specifications, a parts list, directions to build it, the app, and the AR interface—will be freely available.

“The chief goal of translational research is to move research results and technology out of the
lab and into the hands of patients and prospective patients. Providing the technology information in an open-source platform will do just that,” Bowden said.

For imaging to diagnose mental illness and neurological disorders, functional MRI has been the “gold standard,” but it has received little traction. Issues such as cost and the need to limit patient movement make fMRI studies impractical in many patients. Furthermore, complexity and discomfort of existing imaging systems keep most fMRI recordings to less than 10 minutes in length, which adds to the difficulty in reproducing findings at the individual level and studying many patients over weeks or months.

“Research suggests that collecting hours—not minutes—of data per individual patient may be needed to fulfill the clinical promise of functional neuroimaging,” Bowden said. “Accumulating evidence suggests that large quantities of highly sampled individual data are critical for determining whether differences in functional brain organization are behavior-related, disease- dependent, or secondary to unrelated events in the brain.”

The idea of using portable fNIRS systems in neurology and psychiatry has been investigated for conditions that include traumatic brain injury, epilepsy, 27 stroke, ADD, and dementia, but the
systems developed so far are heavy and expensive. The system Bowden and her colleagues have developed is inexpensive, portable, and more tolerant to subject movement, which allows measurement of brain activity in naturalistic situations and is more suitable for children.

The work, “A low-cost, wearable, do-it-yourself functional near-infrared spectroscopy (DIY-fNIRS) headband,” was published in the October 2021 issue of HardwareX, an open access journal established to promote free and open-source designing, building, and customizing of scientific infrastructure. It is currently being funded by a grant from the National Institutes of Health (NIH R21 MH123873-01).

Posted on Thursday, October 21, 2021 in Biomedical Imaging and Biophotonics,October 2021