The new technique, Differential Phase Contrast in STEM, measures and maps electric fields and charge distributions inside a material. The study is the first time that DPC has been used in this way. By analyzing charge images of dozens of such channels, the team found that only some contain the negative charge predicted by theoretical calculations, while others have significantly less negative or even a small concentration of positive charge. Pantelides’ decades of experience with hydrogen led to the suggestion that traces of hydrogen, which are essentially impossible to eliminate, are responsible for the observed inhomogeneity, and subsequent detailed calculations confirmed the hypothesis. Neutron scattering experiments provided evidence in support of the hydrogen scenario. 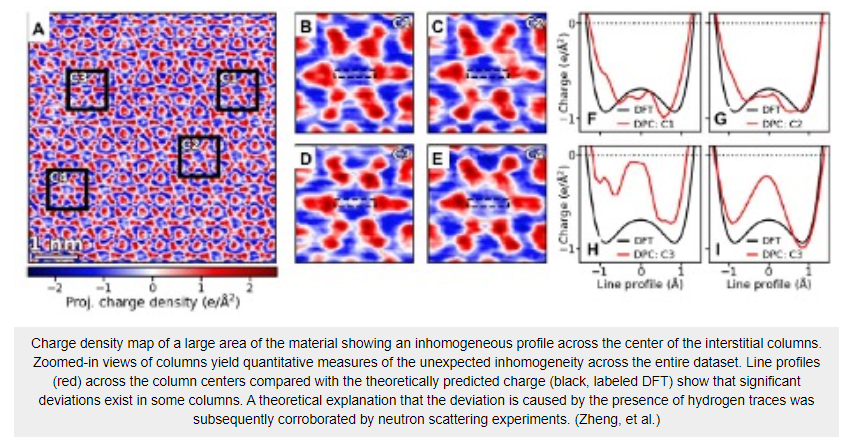 Pantelides expects that many physicists and engineers will be using the results of this study to inform their research, as all modern technology is built on electronic properties of materials.

A frontier research area that took off in the last 10 years, “electrides were slow to understand because of their strange properties,” said Chi, a research staff member at the Center for Nanophase Materials Sciences at ORNL. “This work provides a technique that directly visualizes and quantifies these electrons that behave like an atom with no nucleus, providing a unique tool to investigate electrides.”

“The materials are promising,” said Pantelides, University Distinguished Professor of Physics and Engineering and William A. & Nancy F. McMinn Professor of Physics. “We anticipate that this work will be used in both experimental and theoretical analysis of the exotic properties in electrides and the role that hydrogen may have in their behavior.”

Currently, computer scientists are deploying machine-learning techniques to quickly identify materials with electride signatures so they can be further investigated. It is already known that electrides are good for storing hydrogen, can be used as catalysts, carry strong currents because of their high electron mobility and often exhibit unconventional magnetism, even superconductivity. These and other properties make their development attractive for an array of emerging technologies.