Who is Sam Blum? Correct question!

Sam is an engineering science major who won two free tickets to a taping of Jeopardy! as a high school senior in Aventura, Florida. “My father and I flew out to LA to watch tape sessions. It was an incredible experience. During commercial breaks, Alex Trebek would come over to the audience to chat and answer questions,” Blum said. “I was able to talk with him a few times and I told him I would be back one day.”

Sam is representing Vanderbilt University in the Jeopardy! National College Championship airing now on ABC. His episode airs at 7:30 p.m. CT on Wednesday, Feb. 16, 2022, one of the quarterfinals dates. Sam’s episode is the second one in the one-hour show, 7-8 p.m. CT. In Nashville, Jeopardy! airs weekdays on WZTV, Fox 17.

“I can’t share any spoilers from my appearance in the tournament but on Feb. 16 I will be facing Aniket Dehadrai from MIT and Megan Sullivan from University of Virginia. I had a great time sharing the stage with them. The entire experience was absolutely surreal, and I am so grateful to have had the opportunity to represent Vanderbilt and fulfill a lifelong dream!” Blum said. A list of the 36 contestants is here.

Hosted by American actress, game show host and author Mayim Bialik, 36 of America’s sharpest undergrads are vying for titles and prizes, but only one will claim the $250,000 grand prize and the title of Jeopardy! National College Champion. A second place winner takes home $100,000, and a third place finalist leaves with $50,000. The remaining contestants will receive the following prizes: $35,000 for fourth place, $20,000 for the 8 semi-finalists eliminated, and $10,000 for the 24 quarter finalists eliminated.

Three Vanderbilt students are previous Jeopardy! competitors. Zach Terrill was a finalist and earned a third-place finish in 2012. Eric Turner was a semifinalist in 2014 and Carson Smith was a quarterfinalist in 2018. Gautam Hans, associate clinical professor of law, competed in the quarterfinals of the Professors Tournament in December 2021.

Blum started watching Jeopardy! in middle school. His grandparents and parents all watched the show regularly. It became a dinnertime routine to watch as a family—father Mitch, mother Mindy, and brother Noah, who is now in law school at Tulane—as Alex Trebek read the clues.

“I vividly remember becoming intrigued by Arthur Chu’s 11 game winning streak and unique strategy for choosing clues,” he said. Chu lost his 12th game, which aired on March 12, 2014. Chu is the tenth highest-earning Jeopardy! champion in non-tournament gameplay with a grand total of $298,200. “That was the first time I started dreaming of competing on the show myself,” Blum said. It’s also when the family began checking the game’s website constantly to get tickets to an LA taping of the show. 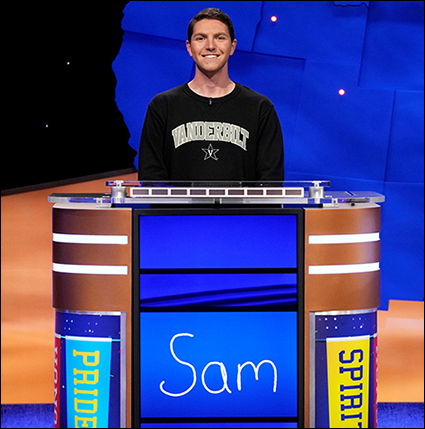 “As an avid fan of the show, I always made sure to check for new online tests for upcoming competitions. My roommates and I watch the show everyday together and when the all-new National College Championship was announced in October 2020, I did not pass up on the opportunity to apply, of course,” he said.

“I’ve always enjoyed problem solving and applying an engineering mindset to other disciplines such as entrepreneurship.” Blum’s late grandfather was an aerospace engineer who worked on the Apollo program, including the Lunar Module Eagle for Apollo 11. Though he passed away when Blum was an infant, Sam credits his grandfather for his engineering genes.

“I decided to enter Vanderbilt as an engineering science major so I would have the opportunity to design a flexible schedule and explore several engineering disciplines over my four years.” Now, his program concentration in Technical Project Management combines classes in computer science, engineering management and business.

Steps to a national championship

About 26,000 students auditioned for the tournament by taking an initial online test. Those who passed were invited to a take a 50-question online test proctored over Zoom. After passing that one and because of COVID, Blum auditioned in a mock “in-person” game with other students over Zoom, which typically would have been an actual in-person game. “That round also consisted of a personality and behavioral interview segment. Several months after that, I got the call that I would be on the show. All-in-all, the process took about a full year from first online test to taping.”

“A lot of people have asked how I prepared for the tournament. Past contestants say that just watching the show is the best practice. Since my roommates and I watch the show everyday already, that part was easy.

“I used a toilet paper roll holder as a makeshift buzzer to practice with since buzzer speed is super important.” Blum used J! Archive, a website that archives every clue from every game of Jeopardy!, and he practiced every week via Zoom with his parents acting as hosts reading the clues.

“I tried to play through the last decade or so of College Jeopardy clues. And finally, several times a week, I went to bar trivia around Nashville with my girlfriend and friends where I learned a wide breadth of valuable facts.”

Blum was notified early in the 2021 fall semester that he would be competing in the tournament. “They flew me to LA over Thanksgiving break. We spent five days there to learn the rules and format of the tournament, film promotional content, and then the filming of the actual tournament.

“The entire experience was incredible! The J! staff were super nice and supportive. Mayim was funny and genuine when talking to us. I found her awesome to work with,” Blum said. “She took time to chat with us when the cameras weren’t rolling, and I think she did a great job hosting.”

“All of the other students were so nice. We bonded during the long days at the studio, meals outside of the taping, and just sharing the secrecy of the whole experience,” he said. “We still have a group chat with everyone that is active every day! It was a once-in-a-lifetime experience, and I’m so grateful to have had the opportunity to participate.”

If Sam doesn’t strike gold a third time with a top Jeopardy! prize, he still has a big win.

“I’m going to work in October at Apple, my dream company. I’ve been an Apple enthusiast since I was nine years old and have always looked up to Steve Jobs and Tim Cook as role models in my life.” Blum will develop apps as an iOS engineer.