The transport of water molecules through nanoscale pores is central to a number of processes like water treatment, biological membranes, ionic/molecular separations, water treatment and protective applications, but the mechanisms of transport are not fully understood. Piran Kidambi, assistant professor of chemical and biomolecular engineering at Vanderbilt, and a team of researchers recently had a paper published in Nature Communications that addresses this issue. 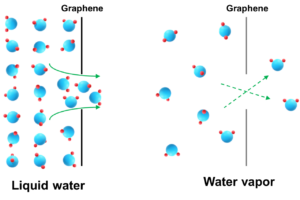 In the paper published November 7, 2022, Kidambi and his team use graphene to create single-atom thick membranes with pores that allow for transport of water molecules but block even the smallest of salt ions (~0.66nm) and small molecules. They used these membranes to study the transport of water and water vapor and found that water vapor transport was much faster (up to 80 times faster) than liquid water. The paper was selected as an Editors’ Highlight, which showcases the 50 best papers recently published in an area.

“The water vapor transport rate of graphene membranes is higher than the generally accepted U.S. military guideline for protective garments and higher than most commercial breathable materials,” said Peifu Cheng, first author and research engineer in Kidambi’s lab. “The ultrafast water vapor transport and angstrom-scale pore size of graphene membranes can enable the next-generation of breathable and protective materials against chemical/biological agents, which would benefit soldiers and first responders using materials that incorporate the technology as well as inform the development of new kinds of membranes,”

Kidambi said most conventional materials have both a pore size and a pore length, but atomically thin materials are different.

“There is only pore size and effectively no pore length (just one atom), which allows for fundamental studies that have been impossible so far.” said Kidambi. “The ~80 fold transport difference between water vapor and liquid water arises from differences in how water molecules flow through nanopores — liquid water transport occurs near the continuum flow regime while water vapor transport occurs in the free molecular flow regime.”