Leah Dundon, research assistant professor of civil and environmental engineering, has been awarded a $2.5 million NSF grant to establish a Climate Leaders Academy at Vanderbilt that will support students learning about climate change from a range of perspectives and include participation at the annual United Nations climate change conferences, known as COPs. 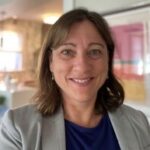 The Climate Leaders Academy that is supported by the new three-year grant will offer opportunities for students from a range of institutions of higher education to learn about and work together to address climate change issues. The program will also focus on efforts to expand access to climate change studies from under-represented populations.

The NSF-supported Climate Leaders Academy is expected to launch in the spring of 2023.

Dundon says this grant represents a culmination of work she started in 2018 pursuing official U.N. “Observer” status for Vanderbilt, which allows students to attend the organization’s annual climate change negotiations and conference. Around the same time, Dundon developed and began teaching a Vanderbilt course exploring climate change from scientific, legal and societal perspectives. 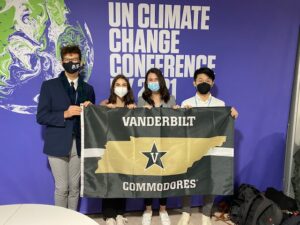 “Being able to take students to participate in the annual COP climate change events allows them to see first-hand some of the barriers to global action,” Dundon said. “Yet, nearly all of these students leave inspired by the many thousands of people—from hundreds of countries—working diligently to address those barriers, and with a greater understanding of how addressing climate change can also help alleviate other longstanding problems like pollution and poverty.”

Dundon had previously been engaged in the Youth Environmental Alliance in Higher Education (YEAH), a NSF-supported global network of universities seeking to develop interdisciplinary climate change education programs and to train students to work across cultures and institutions on climate change issues.

She said Vanderbilt has offered invaluable support for her efforts, including from Professor Mark Abkowitz, Director of the Vanderbilt Center for Environmental Management Studies (VCEMS), as well as the offices of the chancellor and provost.