As the Arctic ocean responds to a warming climate it becomes a less icy, more viable and eventually more convenient shipping route.

Vanderbilt researchers are analyzing whether the Northern Sea Route that runs along the border of northern Russia is quicker and less costly to shippers, and weighing environmental concerns that could exacerbate already serious threats to the region. 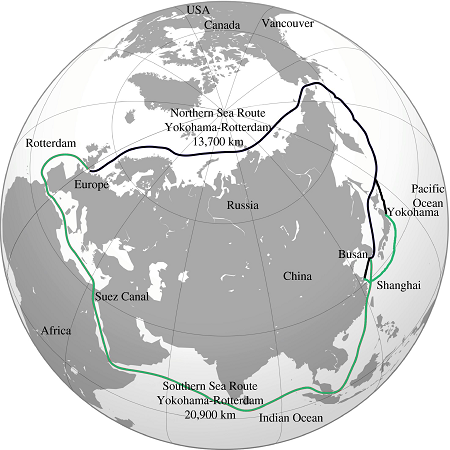 Travel along that route, between Japan and the Netherlands, is 37 percent shorter than comparative routes along the Suez Canal in the Southern Hemisphere during times of little or no sea ice.

But distance is far from the only factor to be considered, said Hiba Baroud, assistant professor of civil and environmental engineering. “There are many factors that must be taken into consideration to determine if a trip along the NSR is a net benefit to the shippers, surrounding environments, and coastal communities,” Baroud said. “For example, cargo ships must be outfitted for protected navigation, have safe places to dock and be reachable by emergency responders before we could definitively say that the NSR is a safe and cost-effective way to move shipments around the world.”

Baroud, Littlejohn Dean’s Faculty Fellow, and Ralf Bennartz, professor of earth and environmental sciences, are collaborating with Alice DuViver, a scientist at the National Center for Atmospheric Research, to develop risk analysis framework that evaluates the economic and environmental tradeoffs between this new potential trade route and established southern routes.

“A preliminary analysis of a simulation comparing the two routes enabled us to make a projection for what global shipping routes could look like through 2100,” Bennartz said. “Until 2050, the Suez Canal will remain a better option for shippers because of the increased risk of navigation along the northern route.”

The research, conducted through an interdisciplinary lens and with input from Arctic communities, is funded through Navigating the New Arctic, a National Science Foundation initiative.

Posted on Thursday, October 1, 2020 in Energy and Natural Resources,October 2020