An alumni-owned company that developed copper-based phone cases amid the COVID-19 pandemic has set its long-term sights on antimicrobial coatings for door handles, railings and other high-touch surfaces in public spaces.

“We’ve been very lucky because most of our sourcing and production has been done in the U.S.,” Lichter said.

The team recently raised about a seed round of about $200,000 and is setting up a long-term production facility in greater Chicago, he said. 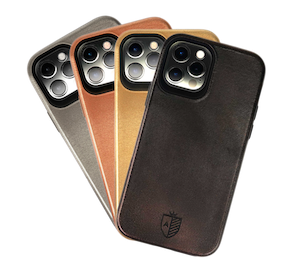 Alloi recently passed 13,000 customers, and, in the near term, hopes to expand to developing wallets and water bottles.

Adding the new phone case finishes—dark bronze, silver and gold, in addition to original copper—allows Alloi to expand its reach to customers who want more choices in an antimicrobial product. Each option has its own look and feel, said Lichter. To customers, appearance does matter, and many initial buyers liked the copper case as much if not more for how it looked than its germ-busting properties, the team said.

“We want everyone to believe and know about copper and its antimicrobial properties, but we also want to appeal to more people,” Lichter said.

Alloi donated a case for every case they sold in 2020 to healthcare workers, starting with those at VUMC. This year, the company has continued to make monthly donations to essential workers across the country, branching out to include grocery workers, sanitation staff, and transportation personnel. In the future, Alloi’s founders hope to donate copper surfaces to schools, hospitals, and other public buildings to mitigate surface-based disease transmission.