Compared to rail and truck, the U.S. inland waterway system is the least carbon-intense and most fuel-efficient mode of moving cargo and freight—by several orders of magnitude. Even then, the inland shipping sector contributes an estimated 6.2 million tons of C02 each year.

The UN International Maritime Organization in 2018 set a goal to cut the maritime shipping industry’s greenhouse gas emissions by at least half by 2050, and much of the push has been focused on the heavy carbon footprint of blue water cargo vessels. But shipping on the inland waterways is getting more attention. 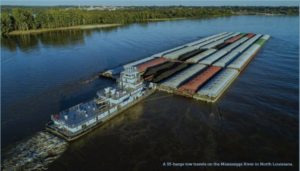 A landmark new report by Vanderbilt transportation and environmental engineers looks toward decarbonization of U.S. waterways and evaluates the potential for possible future propulsion technologies and alternative fuels to reduce carbon emissions.

The comprehensive study, the first to examine the U.S. inland waterway system through the lens of reducing greenhouse gas emissions, was done on behalf of the American Bureau of Shipping (ABS), a leading global provider of classification and technical advisory services to the marine and offshore industries. The research itself was a collaboration between the Vanderbilt Center for Transportation and Operational Resiliency and the Vanderbilt Climate Change Initiative.

“There has been a lot of work focused on decarbonizing the international and coastal shipping sector but much less focus on the inland river sector, in part because it is already one of the most sustainable ways to move freight,” said VCCI Director Leah Dundon, JD, ‘97, PhD ‘17, Director, Vanderbilt Climate Change Initiative.

“The inland river sector has some unique technical characteristics that present real challenges to successful decarbonization, but we are excited about some of the possibilities and pathways we identified in this report,” she said.

Looking at electrification
One of the big characteristics that gives inland shipping its lower carbon profile—standardization—also makes decarbonization more difficult.
River depth and width, plus the lock system and lock sizes, limit vessel length and overall dimensions, weight, and draft. The maximum underwater depth for a tug and barge, for example, is 10 feet.
The research team found that electrifying larger river boats may not be feasible with current technology because of the large batteries required. However, retrofitting certain smaller boats known as “fleet boats” could be accomplished in the near-term. Converting all fleet boats to electric propulsion is estimated to reduce total annual average industry diesel fuel consumption by approximately 20 percent, or 1,000 kilograms of CO2 depending on the fuel types used to generate electricity. Each of the 1,000 fleet boats uses about 100,000 gallons of marine diesel each year.

Evaluating alternative fuels
Outside of electrification, the potential for using alternative fuels is mixed. Biofuels and methanol present the most feasible options because they can be used in some existing marine engines and are supported by current infrastructure, according to the report.

Biofuels also have energy density near to that of marine diesel, meaning existing fuel tank-size may be sufficient. Ammonia, hydrogen, and liquefied natural gas—a fossil fuel with lower emissions than diesel—have substantially lower comparative energy density than marine diesel, which would require significantly larger tank volumes. Existing tanks could not be used at all.

The report includes a case study and naval architect renderings of a retrofitted, weighted and balanced electrified boat, plus analyses of historic and projected cargo tonnage and current market conditions.

“These types of grand challenges can’t be undertaken alone—they require input and insight from a broad range of skill sets and expertise,” Dundon said.

Posted on Thursday, October 21, 2021 in Energy and Natural Resources,October 2021